What model was it? 1996 Honda CA125 or more commonly known as the honda rebel.

Good points?
1. Extremely reliable
2. I loved it's looks. Chrome and black, really nice scheme. Got some comments too when out and about
3. Nippy through towns.
4. Insanely good handling for a cruiser. Was really light and nimble around bends, could corner faster than pretty much any car I've met on the twisty A roads of Scotland.
5. Cheap to run... im tempted to go back to a 125 just because of how cheap they are for commutes.
6. So easy to repair, the engine is so openly accessible
7. Parts are so easy to obtain, the 250 version is very popular in the USA, most parts fit the 125 as it's a 250 frame.
8. Great learner bike for anybody considering a cruiser for a cheap price.

Bad points?
1. Although this is also a good point... Chrome. It has a habit of rusting over and going nasty. Needs lots of TLC.
2. Not the best position for the taller person. I found I got back ache after long journeys, constantly slightly kinked back, Im 6ft.
3. it's mpg is ok... But it's not as good as some 125's.
4. It's not as fast as some other 125's. Might of just been mine though, maybe low compression due to it's millage etc.

Would you get another?

I personally wouldn't, not due to the bike. It's a great ride. Definitely a perfect bike for a cruiser enthusiast. But I'm more into sports bikes.

To sum it up, if you're into cruiser bikes, you don't mind a bit of polishing on lazy Sundays and you want a shiny cruiser then you can't go far wrong. I think the honda shadow 125 is nicer, but this bike is cheaper and certainly adequate for any learner motorcyclist. 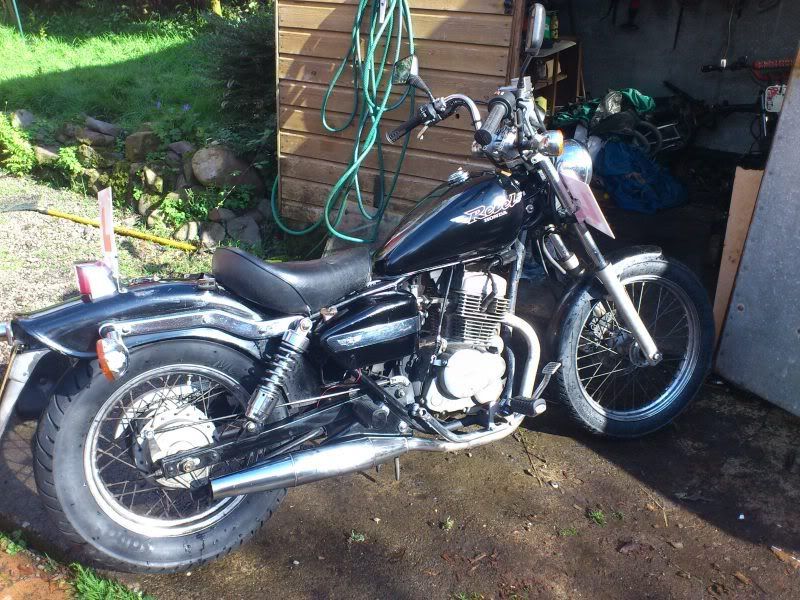 wanted one of these when they first came on the scene never got one though. thanks for the review xx
I count my friends in burnt out spark plugs.
Top