i have rode the previous -2012 model and i am 100 miles into the engine break-in and so far my initial impressions so far!
engine
Absolutely bags or torque even though i havent been over 5k revs yet due to breake-in, it will pull like hell in any gear and had a lovely tone to it with a deep growl under hard acceleration that the previous model didn't have, the gearbox feels really tight and precise
It does have a taller first gear over the -2012 models which make the bike less willing to wheelie off the throttle but i can live with that
Tickover is quiet high but i am putting that down to being on break-in map

Suspension/Handling/Brakes
Apparently the 2013 model had a revised frame,swing-arm and lighter rear brakes but to be honest i didn't really notice much difference between the -2012 model and the 2013- model,, but compered to my bandit it feels like a feather, its so much lighter and much more flickable into the corners
I am still a novice rider and the confidence the bike gives me is 10 fold over my old bandit , i feel really comfortable leaning it over into a corner on a crappy cold winters day, much more than i ever did on a hot summers day last year on the bandit
The brakes are great they are really powerful and more or less feel the same as the -2012 model but i feel the initial bite on the front brake of my bike a tad harsh but this might calm down after the pads have fully bedded in

Good Points
that torquey engine, no up and down the box in town traffic like i was with the bandit
feather like weight that just inspires confidence
really comfortable riding position
mega powerful brakes
Updated more modern styling
Added fuel gauge over the -2012 model 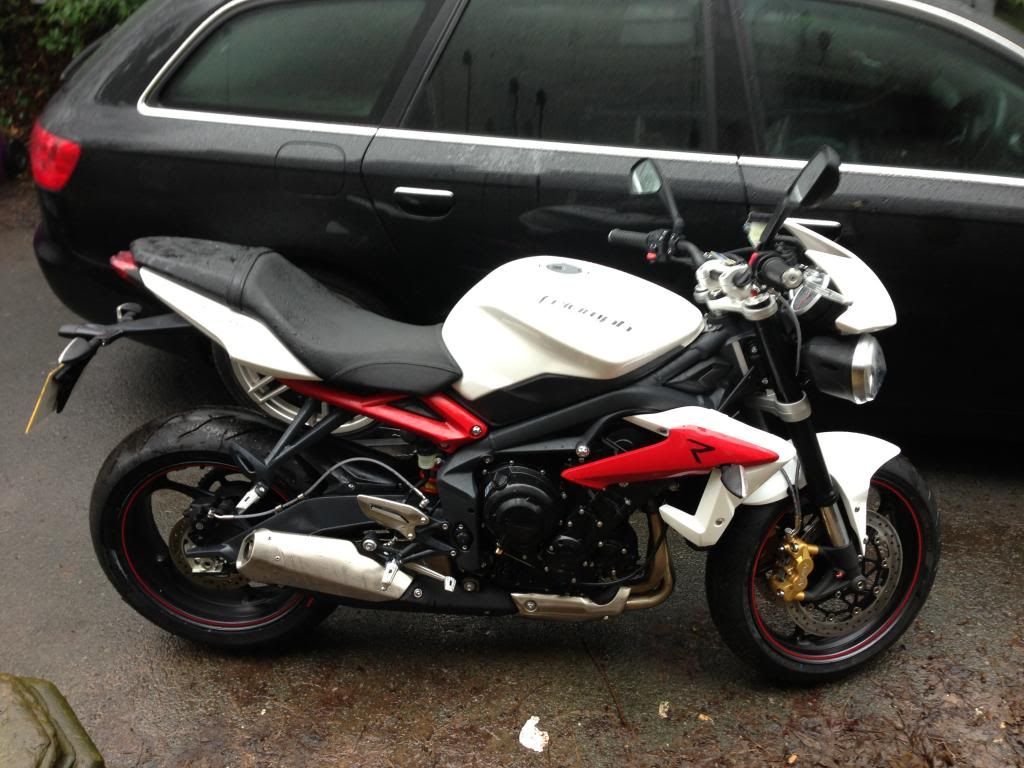 yea dunno how that happened
Top

Nice one.
Hope you got some riding in today in the dry.
Top

How you getting on with the bike?
I really do love the look of the new Street Triple R and would of bought one. But the bike aint practical for me as i would need to get a top box for it, and that would look horrible on the bike. So i bought a Tiger 800XC instead, as you can see in my review.
How many miles do you get on a full tank?
Top

bakes0310 wrote:How you getting on with the bike?
I really do love the look of the new Street Triple R and would of bought one. But the bike aint practical for me as i would need to get a top box for it, and that would look horrible on the bike. So i bought a Tiger 800XC instead, as you can see in my review.
How many miles do you get on a full tank?

loving the bike mate, i had 600 bandit before this and the power and wight difference is unreal and i haven't been able to ring its neck yet due to run in period
Top

Any chance of a long term update?
“Security is mostly a superstition. It does not exist in nature, nor do the children of men as a whole experience it. Avoiding danger is no safer in the long run than outright exposure. Life is either a daring adventure, or nothing.”
Top
7 posts • Page 1 of 1