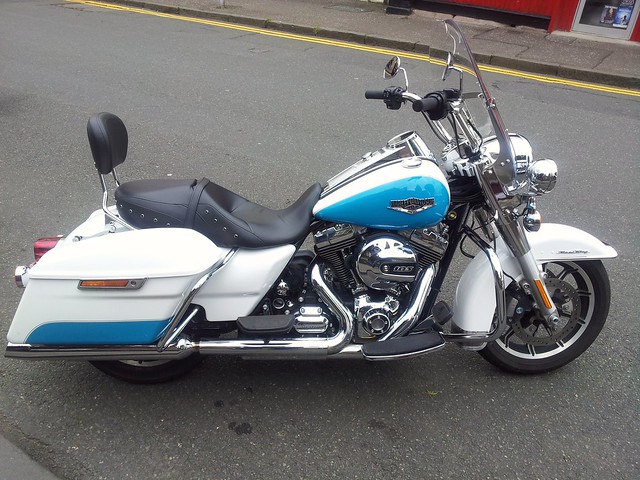 Good Points
- it handled and griped very well indeed. No matter how far I leaned it did not ground. It was very stable and confident around corners.
- road presence, it gets respect!
- seat for both rider and pillion was very comfortable.
- 210 mile tanks range.
- torque, lost of it for mid range overtakes and uphill drags
- gear indicator
- nice clutch
- back brake effective
- mirrors, small but very effective

Average Points
- the screen was effective up to 80mph and then it may have well not been there
- speedo means looking down too far.
- all the controls buttons are the same and easy to mix up.
- low speed manoeuvring needs practice.
- front brake less effective and caused bike to bounce.

Bad points
- the ride was harsh over the bumps.
- tiny digital rev counter
- it is very hard to push/pull it due to the weight, so you have to plan where you stop.
- transmission whine
- tiny panniers
- vibration. No wonder the hand grips are rubber.

I wanted to try a Harley too see what all the fuss is about. So I got a hire for my 50th birthday and took Throttled Jnr with me. He loved it as a pillion and the experience. I have more mixed feelings. The handling and grip was way better than I expected. The ride was way harder than I expected. Two up with a friend who weighs about 13 stone, so nearly 30 stone between us and we hit a bump which made him airborne and hurt my back. I was not expecting that! But the handling was way better than I thought it would be and so long you go in slow and accelerate through the bends it is very stable.

I have not reviewed the gears because they are nothing like any other bike I have ridden with the forward controls. I am sure once you get used to them they are fine, but I struggled a bit. Very solid clunk and you can hear the gear change even at 60mph.

It gets lots of looks, waves and respect which is why it must suit some as Harley riders really are a big club.

At £18k new I would not buy one. It is a one trick pony for those who want to buy into a culture. It was also a couple of months old and the exhaust was rusting. My preference would be a Japanese muscle bike with all the torque but less vibes, a silky smooth four cylinder engine that revs higher, better build and a better combination of ride and handling. I also prefer the lack of image compared to the Harley. Plus I would gets lots of change from £18k.

But total respect to Harley riders, it is a beast which needs tamed and I can see why they are loved.
Audiophile/biker/sceptic
Top

You can buy a little pump to adjust the rear suspension to accommodate for extra load. I kept my Glide Ultra inflated at the read to accomodate my (standard issue HD rider) less than svelt frame.

I hired an Electraglide for a few days in California earlier this year. It was surprisingly agile and easy to chuck around for such a big bike, but the vibrations and the noise were horrendous. The front brake was comically bad too - I'm sure I stuck both feet straight out in front of me and used some bad language the first time I used it!

"It is only with the heart that one can see rightly. What is essential is invisible to the eye."
- Antoine de Saint-Exupéry
Top
3 posts • Page 1 of 1