Being relatively new to riding and not actually really needing a bike it’s taken me a few years to actually work our what I want to use a bike for. I’ve found that I don’t really go for quick blasts for an hour or so. It tends to be either all day rides or longer trips of at least one night away quite often camping.

In the (almost) 3 years since passing my test I briefly had an MT07 which I only had briefly before getting offered a fantastic deal on a street triple RS. I covered about 14k miles in 18 months on this bike and loved it but it’s quite small for me and didn’t offer much in the way of all day comfort. Servicing was fairly pricey too. I paid not far off £1000 in routine servicing whilst I owned it. Fantastic bike though and for short rides it was a lovey thing.

The Z1000sx took my fancy as it was a similar power to weight as the street but offers a lot more touring capacity. I could only get a couple of short test rides on them but it get good and I fitted on the bike a lot more comfortably. Again a great bike but there was a few bits that I couldn’t get on with, the LCD display was near enough invisible in the sunlight being grey characters on a black background. The seat was also massively uncomfortable after about an hours riding. The main thing though was I never quite gelled with it, it didn’t like cross winds and would easily be blown about. It was a good bike and they are very common for good reason but for me it just didn’t feel right.

Thoughts moved onto potential replacements and the only thing that I really fancied trying was the GS.

I booked an appointment with my local dealer. The bloke I’d spoken to arrange it was away so someone else was going to check my license and give me the keys. When I arrived I waited 10 minutes then he came over to reception and told the lady he was too busy so someone else would have to deal with me. I gave them another 20 minutes and no one had spoken to me since I’d arrived so I walked out.

I went to the next dealer and they couldn’t have been better they had given me the keys to their demo bike within 10 minutes of me just turning up out of the blue. They said no ones booked on it so take out for a couple of hours.

I didn’t really know where I was so set a random route on the calimoto app and set off. I covered all kinds of road, single track, country lanes, residential, town centre and motorway. I loved it. When I returned to the dealer they asked when I might be looking to buy a new bike. I said I’d do it today if the deal was right. They looked at what was available (bmw were offering extra trade in on stock vehicles) found what I had in mind and gave me the list price. I asked if there was any discounts available, no sir, no discount on bmw. I knew this wasn’t necessarily right as the first garage had already given me the numbers they would sell me one for if the test ride went well.

I left the dealer and said I’d have a think about it. I didn’t really want to go back to the first place due to their attitude but I wasn’t going to pay full whack either.

A couple of days later I remembered the IAM (I did the training and passed the test last year) has some affiliate discounts so I had a look to see what was available, one of them being BMW so I gave them a call to see what they could do. They offered a very attractive price along with a great trade in price on the Z. That was it for me the deal was done.

Being park lane there’s no forecourt, you have to park on the pavement outside. It felt wrong but it’s what they told me to do.

There she is, R1250 GS TE. The only options being the sos button that I wanted along with the vario luggage. The bike also turned up with the factory alarm and comfort seat which I didn’t ask for so they discounted those off the cost meaning I got those for free.

The handover was very comprehensive and took quite a while, there is a fair bit of tech onboard and everything was explained to me.

It was rolled out of the showroom and off I went into rush hour London traffic on the biggest bike I’ve ever ridden, I didn’t do any filtering!

It was 100 miles to get home which left me with 500 to go until the running in service is due. I've got it booked in at the end of the month and I've got a few bits going on most weekends but I'd got a couple of days available. I put some engine bars on along with a mudsling and fender extender. Filled the cases with camping things and beer, strapped my tent and chair to the back, booked a couple of sites in wales and off I went.

I was away for 3 days and covered 500 miles in comfort and without issue even though it was sometimes bright sunshine and other times very heavy rain. I rode on lovely smooth tarmac, freshly recovered in new chipings road, even on a gravel road that I wouldn't want to take my car down. It handled everything perfectly.

Even though I was running it in and couldn't use the full rev range it still has a fantastic amount of power even when it is fully loaded. it inspires confidence on the corners and seems to be the perfect all rounder.

There are only two things that are slight downsides, one I'll get used to the other I don't really care about. Firstly there's no doubting that this is a heavy bike, it's only really noticeable at very slow speed and will be something that I'll just get used to. The other thing is that most other riders seem to ignore me and don't nod back, strange behavoir but I don't care what other people think.

Overall I'm thrilled with the new bike and I'm hoping to keep this one for a fair while.

She now sits in the garage for the next couple of weeks until I take her for the 1st service then I'll have a think about where we'll go next. I've got insurance for use for work so there will hopefully be the oppertunity for a few midweek trips too.
You do not have the required permissions to view the files attached to this post.
You can't beat a nice bit of faff
Top

Wow!
Fantastic bike!
What you wrote is very inspiring for me, I really would love to do what you did, load your bike up and go for an adventure.

Thanks for sharing your experience.
Top

Great write up @Bungleaio. The bike looks awesome.
Really chuffed for you. Completely jealous too

I miss my 2 babies 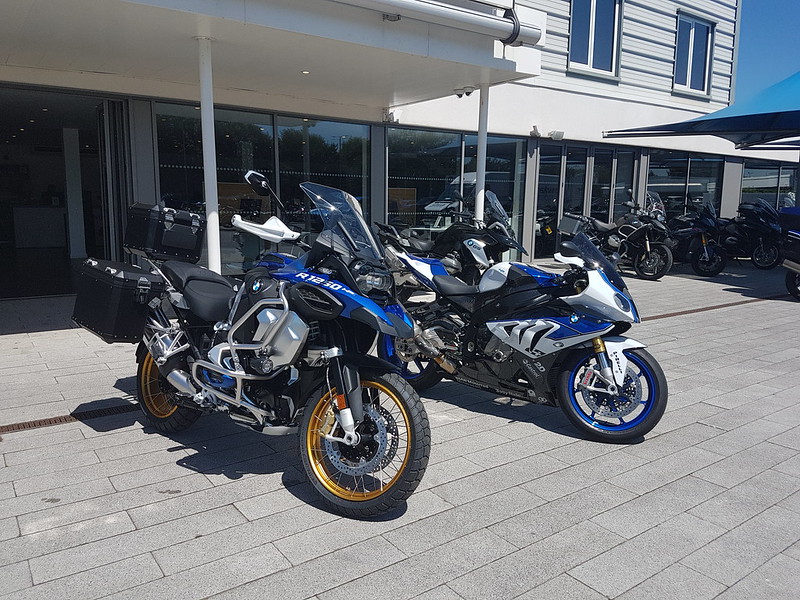 You’ll soon get used to the attitude you get from other bikers. It’s always been the same. I got it in the late 90s when I got my first. Though the look of shock I used to get when I took off my helmet and they realised I was ‘only’ a 30 something was always amusing. Never mind eh. I’ve sat and watched the GS turn from an oddball and rather rare bike to what it is now. On my tour I would guess 3 out of every 5 bikes I’ve seen have been BMWs, aside from in Italy where they seem to be mad about Triumphs, so many of them. Almost outnumbering the GS. You’ll have great fun with that bike. They ARE great bikes, see what happens while the warranty and other benefits are in play. Hopefully you’ve got a good one and any teething problems will be speedily dealt with, that’s if you have any problems. Many never do. (Though those who do always scream the loudest)
A wonderful thing is work, I could watch it all day.
Top
5 posts • Page 1 of 1