Theory test failed before I start the test????

Motorbike related? Can't find what you're looking for below? Then post here!!
14 posts • Page 1 of 1

Theory test failed before I start the test????

Hello gents. had my motorbike theory test booked for today. My nearest test centre (9 miles) did not do the motorbike theory so I had to travel to Ayr which is around 50 miles away. (its only software, the apparatus is the same, the mind boggles at the muppetry involved in that)

anyway I had a few options in terms of routes:

Option 1: A roads, ferries to belfast and the main Northern route to glasgow. this route with a headwind on my 11bhp bike ( I weight close to 17 stone) is a deathtrap plain and simple. lorries for miles, potholes, cross winds. Buckfast swilling lowlanders etc..

Option 2: A 5 hour detour through the valleys of the galloway forest park. scenic and brrrrrrr.

Option 3: slightly off piste through the galloway forest and up and over a few hills. not much longer than the direct lorry infested route.

Now the day before I did the usual pre ride prep on the bike ( wont bore you with that here) and I also planned my route and did a weather check on the route. now I knew there was sleet/snow/ice forecast and I was out in the sleet the night before but acording to the forecast it was fairly mild in terms of snowfall so all looked fairly reasonable

Thus I decided I would take option 3.

I set off with an hour to spare for road conditions, pee breaks, unforeseen whatstits etc. When I set off it was a few degrees above 0, no ice at my house just wet roads, fairly ammicable. my elevation is about 160 feet above sea level.

I had a few hundred feet elevation climb( about 450) over a moor which was a little icy in places, frost on the verge , some ice but mostly just wet, no problems just take it steady.

As I continued north I had an 11 mile stretch that climbed up to about 800 feet. I knew as I set off that the situation might change, I might find it got worse, more ice, more sleet, more snow but I was not preppared for just how bad it could change in 2 or 3 miles.

As I climbed it went from slushy patches to solid ice, banks of fog, snow covered trees and eventually to a road that had 2x 12 inch tracks of tarmac showing through the snow ( it was at this point I should have known I had phuketed it up, turn back before its too late?) traffic had been moving on that road already, no problem just knock it down into 2nd, keep that tire on that tarmac dont stray into the snow.

about 1 mile later I am on my face in a ditch with the engine revving its nutts off because my hand is on the throttle fully pinned and I'm gurning like a 90's child of the night. I hit the kill switch pick the bike up ( 125 FTW) and settle in back on the black stuff. I had simply touched the front wheel on the white stuff ever so slightly and it went!

Check the bike over, rear brake lever slightly bent, lots of mud and snow in my face, no harm done really.. not going to let this defeat me, the crest is 2 miles away, it will get better from there.. got to make it to my TEST!

Another 500 yards and that black strip of tarmac no longer exists. I am using my feet as stabilisers, visability is about 50 yards, I cant even see where the peak of the hill is, the GPS wont work, no reception.. and I am off again. this time downhill slightly bike just drifted for about a yard then ditched me. no further damage, just another gurn session and lots of profanity.

So I failed my theory because I made 2 mistakes. the first mistake was understimating the weather at elevation, the second was not knowing when it was time to turn back! How many P's in that saying again? 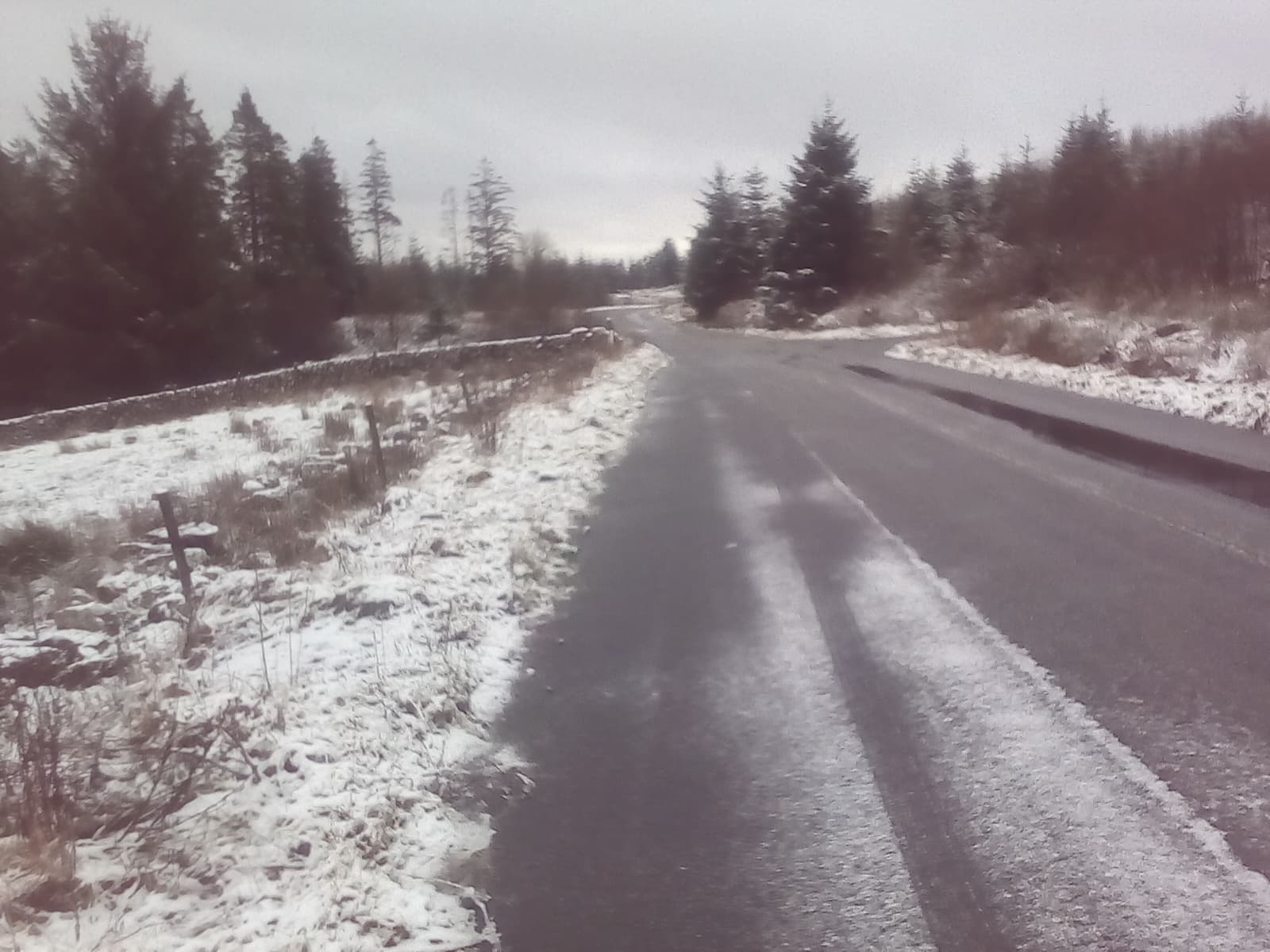 This was when the main elevation climb started and things started getting a bit hairy, looking back the way I came. 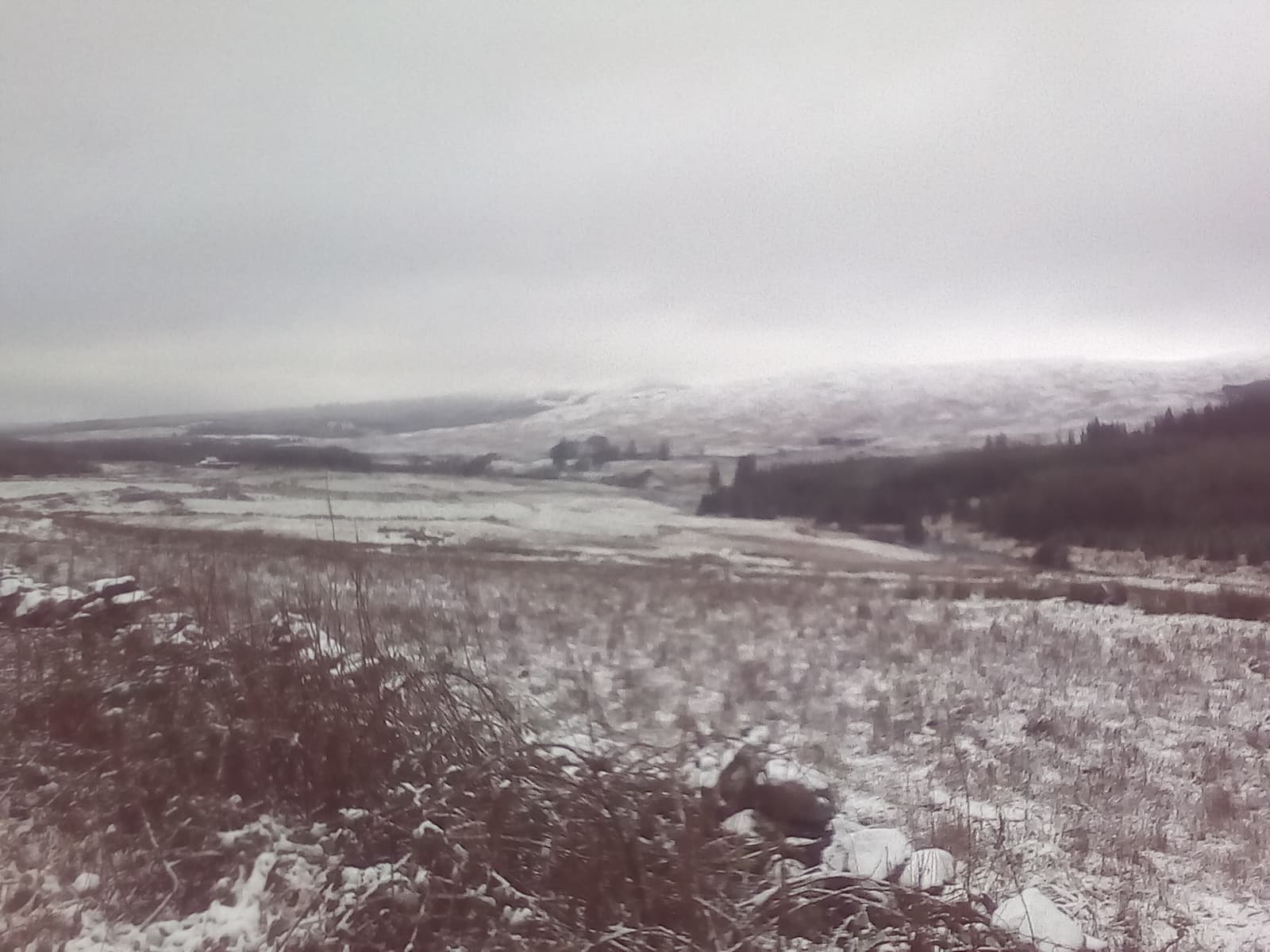 fog banks rolling in, rather stunning. 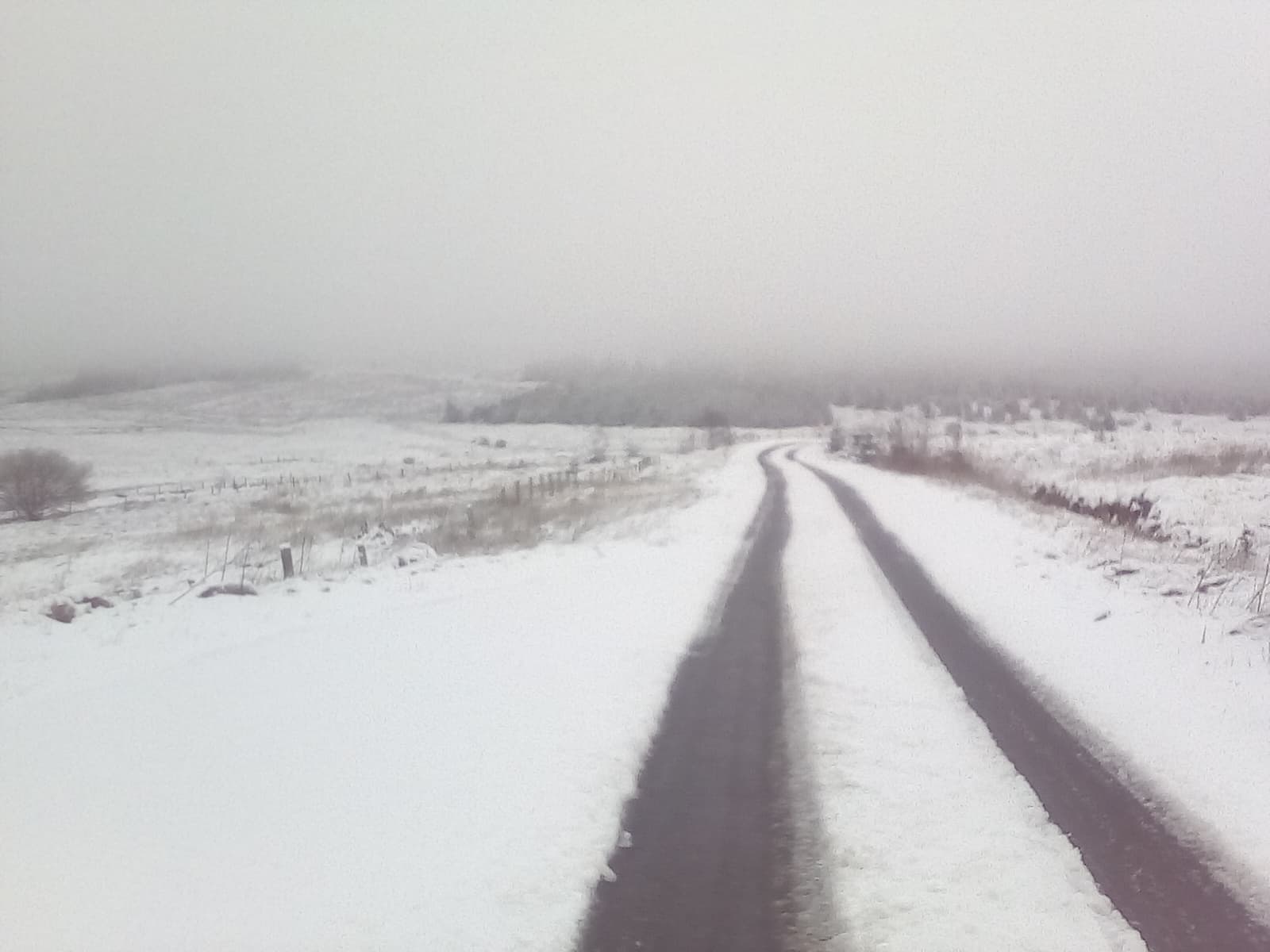 roads started to become a narrow strip of salvation with chaos and despair either side , looking back the way I had come. 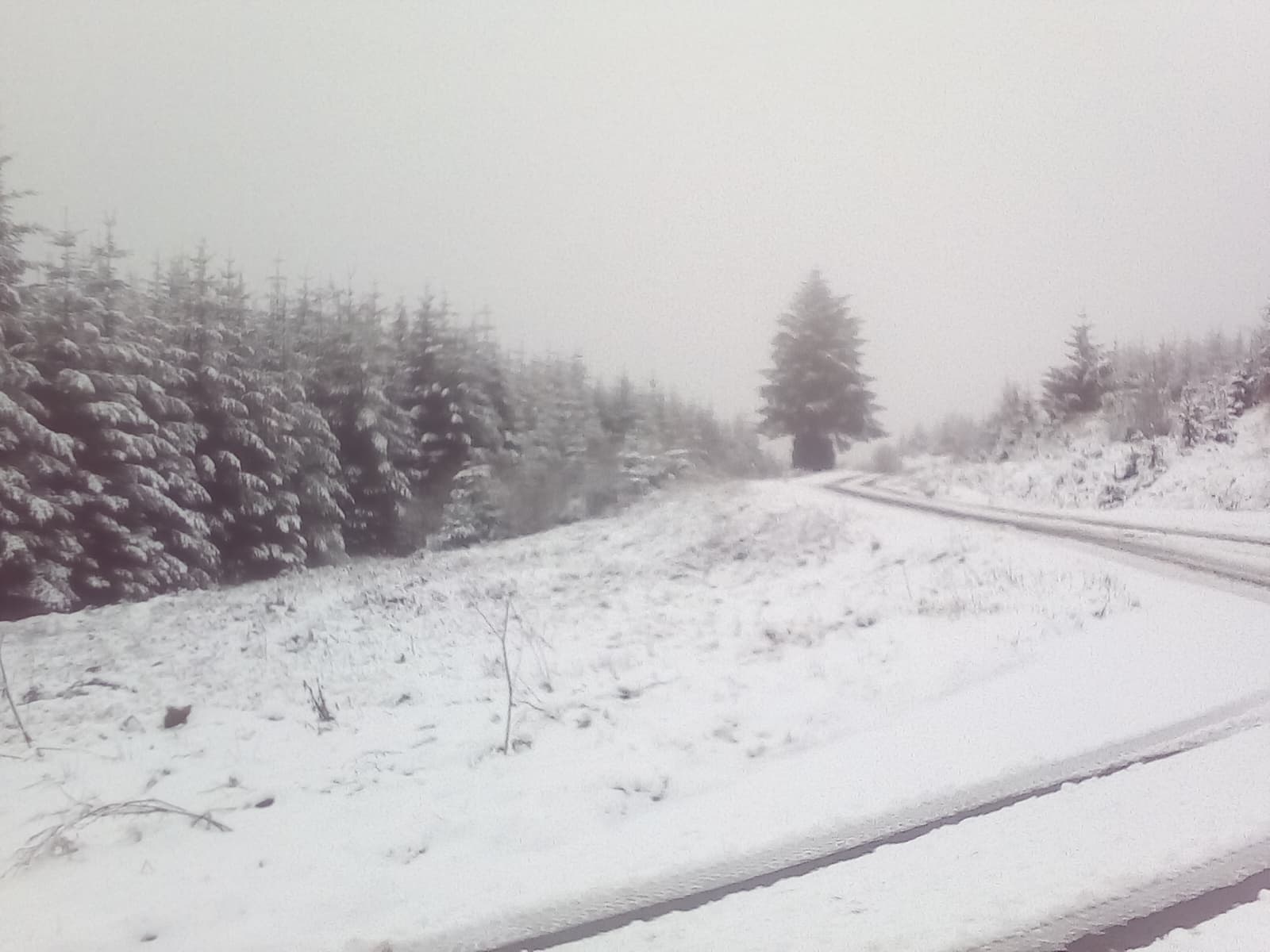 I stopped for a moment to watch and listen to the snow falling of the trees in cascades, quite splendid, but it should be noted that at this point my hand and feet had ceased to exist. 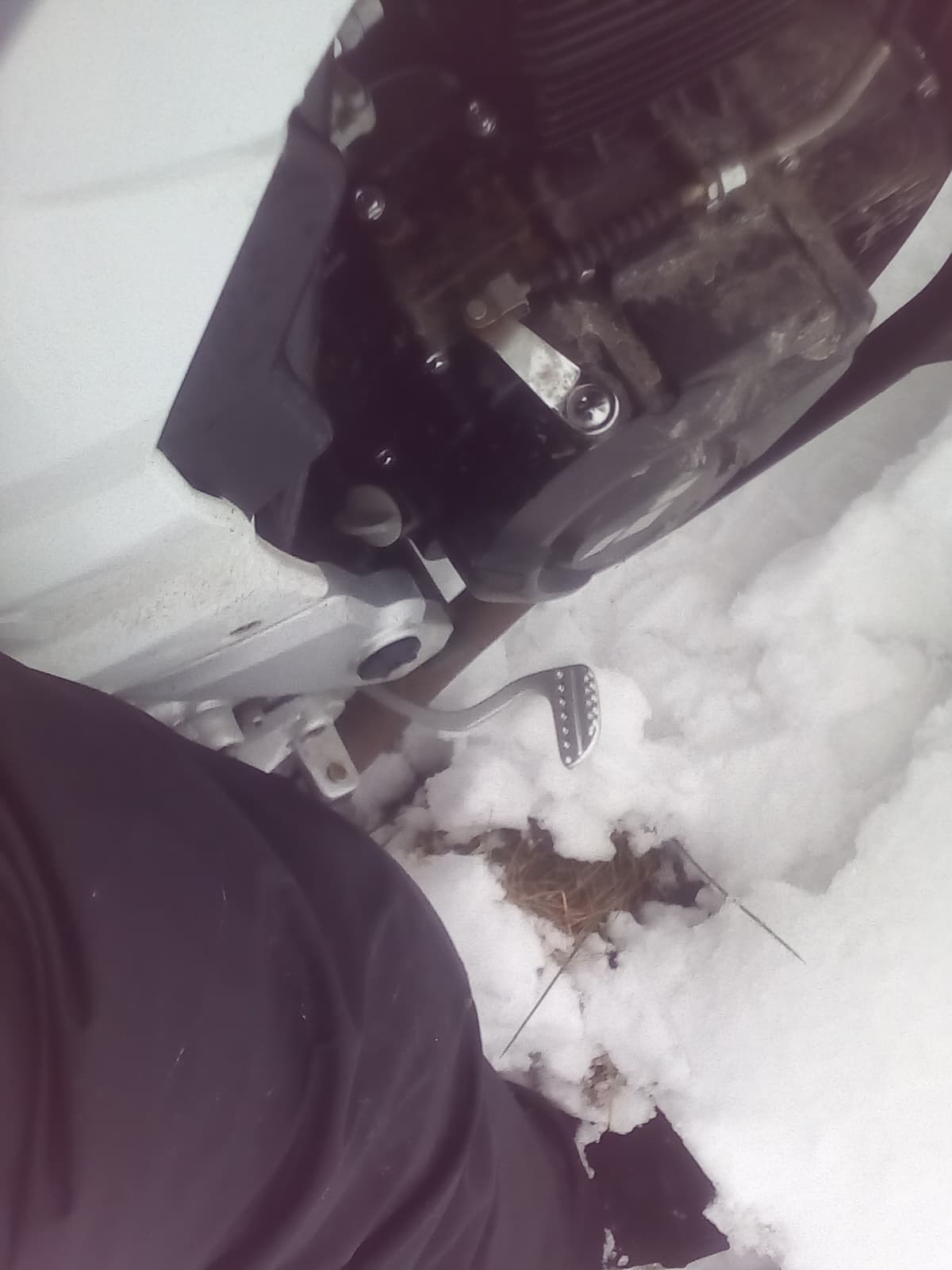 right now I had just gone into the ditch, bent the rear brake lever, muddy face, snowy face, soldier on? 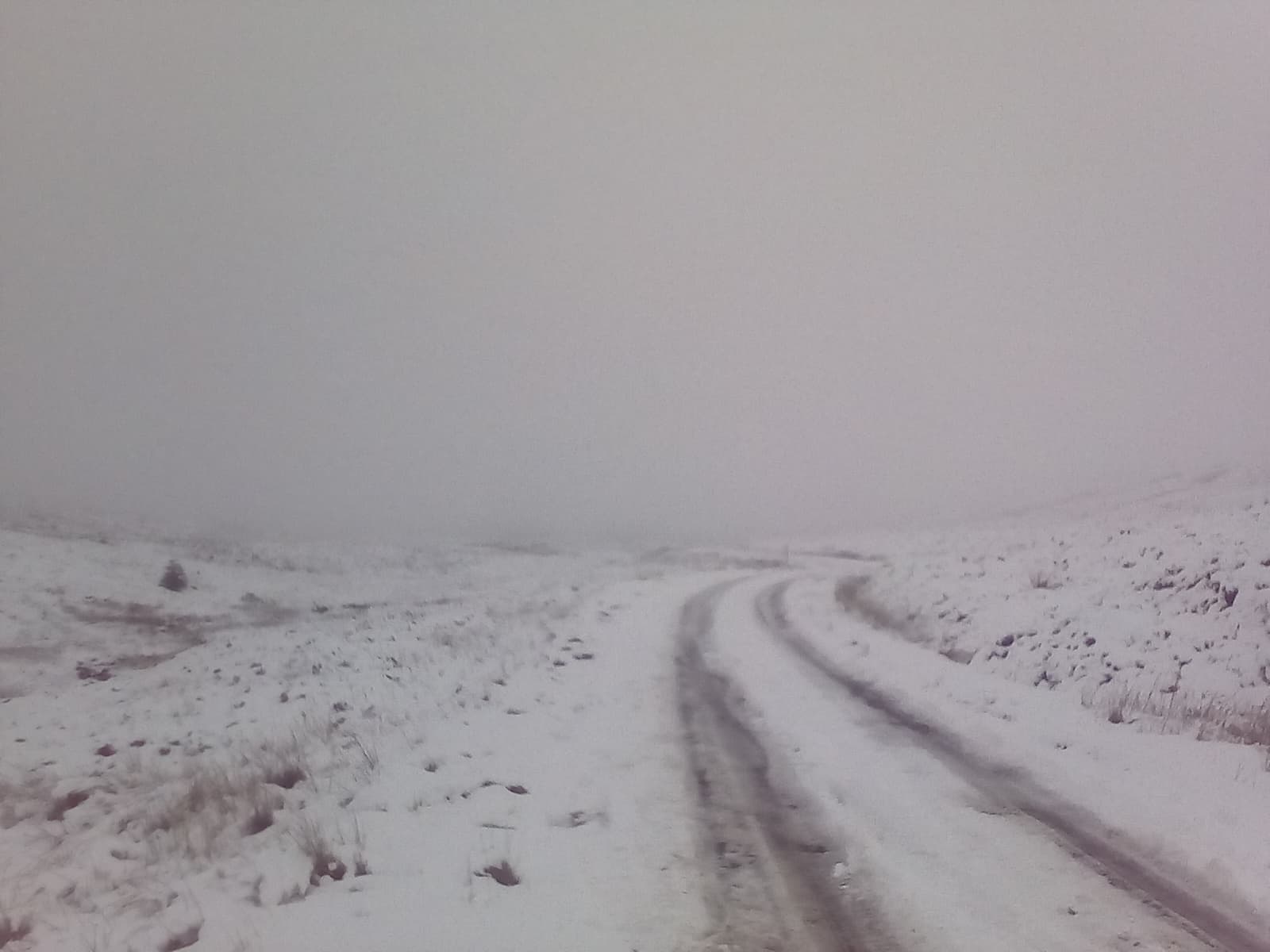 had my second drop by now, looking back the way I have come right pic and ----- the way forwards left pic. time to turn back 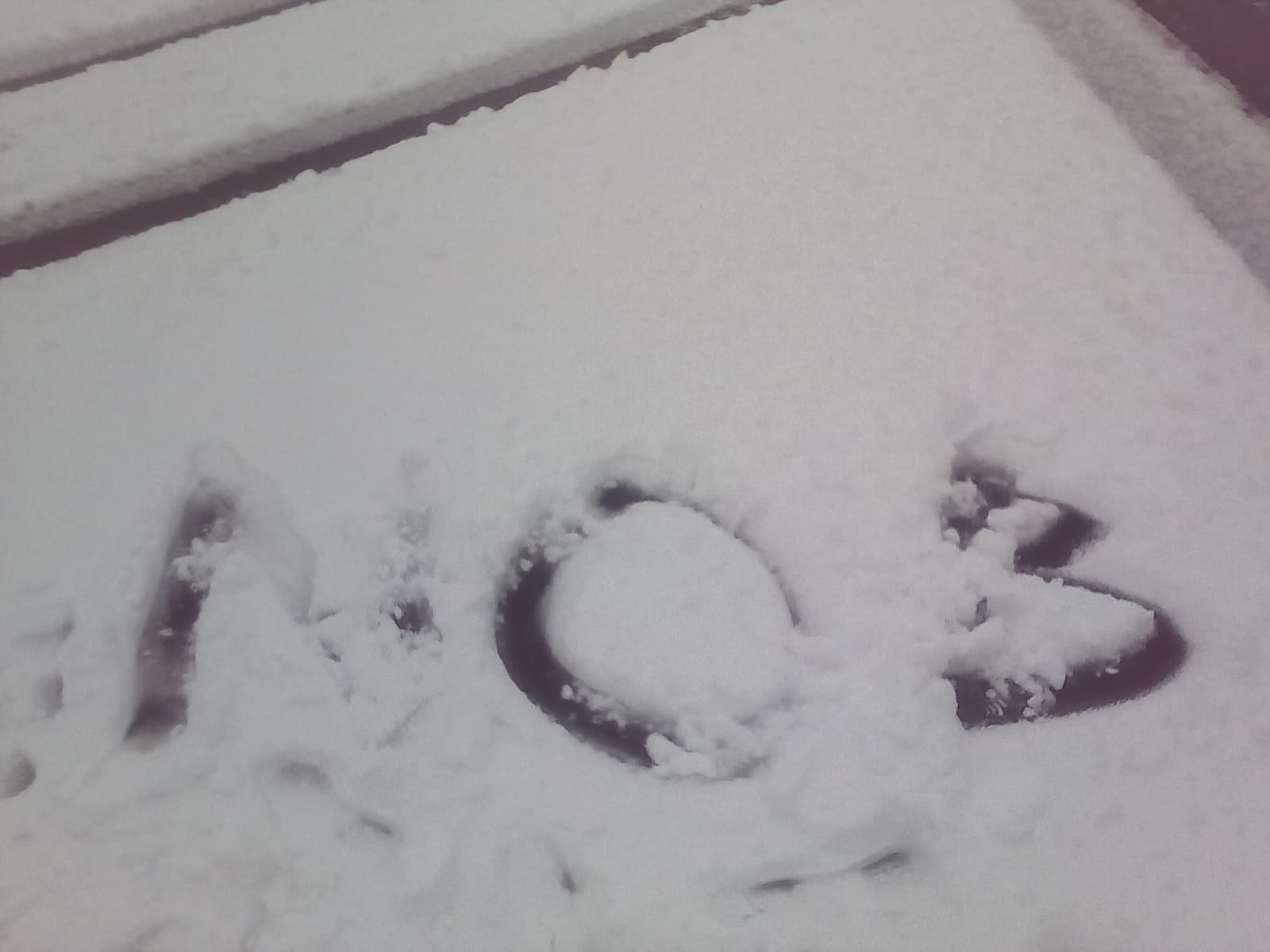 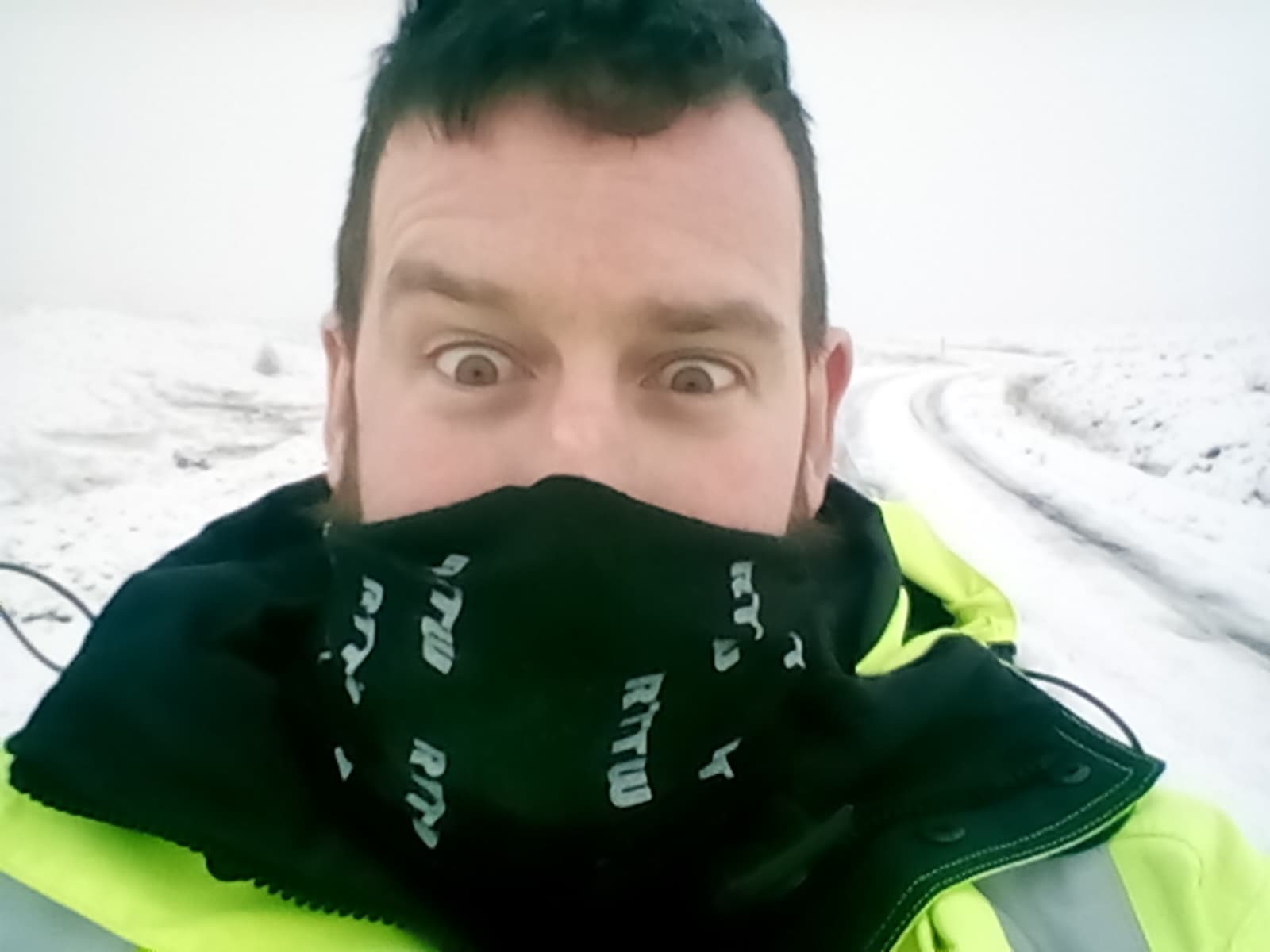 well at least you tried 100 marks for that and there will always be another day for you to try again
the law in all it's majestic equality forbids the rich as well as the poor to sleep under bridges to beg in the street and to steal bread.
anatole france
Top

Well, full marks for effort and perseverance. Riding in those conditions is horrible. I hope you manage to rebook it soon.
Honda CBF500 ABS
Triumph Bobber
Top

Mississippi Bullfrog wrote: ↑
Tue Jan 28, 2020 10:25 pm
Well, full marks for effort and perseverance. Riding in those conditions is horrible. I hope you manage to rebook it soon.

Conditions change so fast and it’s not always obvious to turn back.
Last year got caught on the Fosse Way in cold rain, quickly turned to sleet which settled into slushy snow. At this point the road was steep ups and downs. I was going down, breaks caused the ABS to actuate immediately then going up the back was fishtailing. I made it up to a plateau and stopped. My mate made it to the bottom of a hill where he fell off when the bike slid from under him.
We should have stopped when there were first signs of the sleet.

Still you survived, and so did we, but valuable lessons have been learnt.

Good look for the retake.

Well good for you for giving it a go . I thought you might find this of interest . https://www.gov.uk/government/news/haza ... conditions
Top

Altitude makes a huge difference, glad you survived unscathed and at least you will remember the first attempt

Good luck with round 2
Bite my shiny, metal ass!
Top

Nice writing style by the way. I enjoyed reading about your adventure.
Time spent being groovy to each other is always well
Spent
Top

I remember having to join a school residential on the Menai Straits one February. I had to leave in the evening so it was pitch black and blizzard conditions. The A55 was a nightmare, I literally couldn't see anything. The snow blinded out the headlight and I couldn't even see where the road was.

In the end I had to stop and wait for a lorry to come along - there was very little traffic moving at all so it was a long wait. A truck came along and I tucked in behind him and just followed his lights. It was only much later I realised I had no idea where the lorry was going so I could have been halfway to Swansea by then.

Fortunately he was heading along the coast and by the time we got to Conwy the snow stopped, the sky cleared and the temperature plummeted. It was seriously cold - there used to be a Little Chef near Conwy so I stopped there and my left hand glove was frozen to the grip.

When I got to Menai I stood under the shower for an hour trying to warm up.

sorry to see you came of you made a galant effort, the way you described it made me chuckle so thanks for that and good luck
Top

Ahhh sucks that it wasn't a happy ending, but at least you got an adventure, and we got a well-written story! Top marks for trying also!

Fwiw, if you get caught out in stuff like that again, you can sometimes find more grip in the uncompacted snow, than there is on the black bits either side.

Love the pictures btw, they really helped with the mental imagery!

blame climate change, gets the blame for every thing else... i mean snow in January

"People know me. I'm very important. I have many leather-bound books and my apartment smells of rich mahogany."
Top

To cold for happy ending
Top

Thanks for the words of wisdom folks and glad it was not a chore reading. every day is a school day.