Planning a trip in the UK or overseas? Whether you are planning on touring in Europe or the UK use this section to ask about places to visit, stay and general advice.
173 posts

Slowlycatchymonkey wrote: ↑
Wed Sep 12, 2018 10:27 pm
You’ve not had a working bike since Tuesday? And won’t again til Friday? That’s frustrating, I hope your using your time wisely and eating enough to test the suspension on your way back!

Rain has stopped play a bit today - currently chilling out having a nap trying to fix my calf muscle... which has taken a dislike to being on the GS for 300+ miles every day since Saturday....
Top

The body is a frustrating thing, fancy it taking a dislike to suddenly being made to ride 300miles a day, who could of known?

Enjoy the days rest.
2018 BMW R nineT
“It’s shit. And as soon as I get home I’m going to buy one.”
That was a fellow journalist’s first impression of the BMW R nineT recently. It’s a pretty accurate summary; the R nineT is somewhat ill-mannered by modern motorcycle standards but also instantly, inarguably, infatuatingly wonderful.
Top

So we had a rest day, which meant a 200+ mile round trip to France and back, with the fastest miles saved for the end of the day. Far too much food as usual, but with no time for cake

it's wasn't the complete calorie disaster of Tuesday, from which we are still recovering.
Two Soups
Top

Did anyone go on the Ring this time round?


No.. to be honest nobody asked. though I did remind them at the start of the week that we could go either Thursday or Friday - when it would be open. We passed it on Tuesday.. and stopped for a photo. which will be posted sooner or later. And that was it. Very much a riding holiday this time round.. with only one 'spur of the moment' destination... when early morning rain forced us to chase the dry weather southwards into northern France and we went to Verdun.

Gee Esses? one or two.

When touring Europe you learn more about the UK, than you do the place you’re visiting.
Top

Guess I'll start with the pictures then.. Sorry these are all a bit bike-focused but I had the TRX forum in mind, I'm going to blow their minds by just riding it on the road a bit instead of sitting in an armchair talking about racing and tuning as if it's some kind of thoroughbred. Anyway!

TRX in full touring mode, waiting to get on the train: 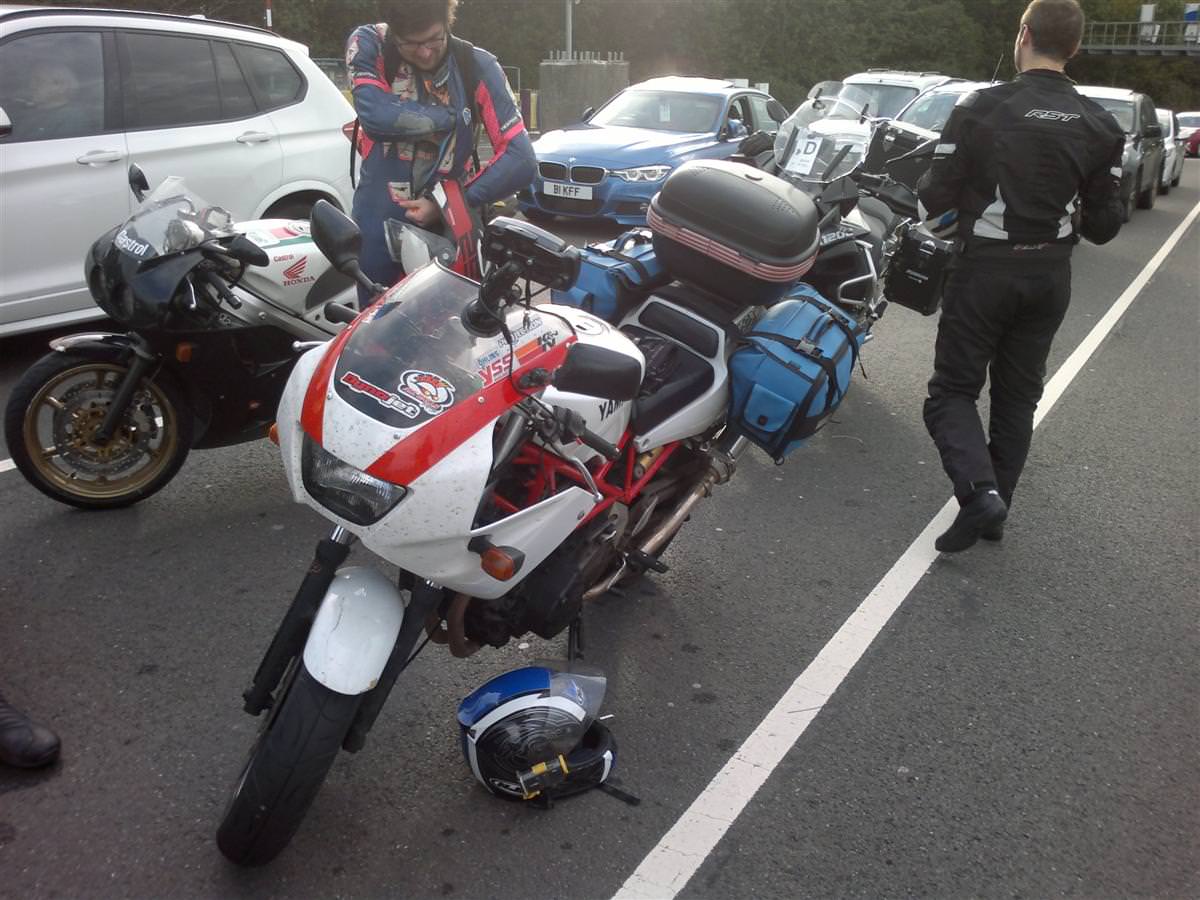 TRX back in race mode (except the 'Nav I suppose) ready for glorious sweepers: 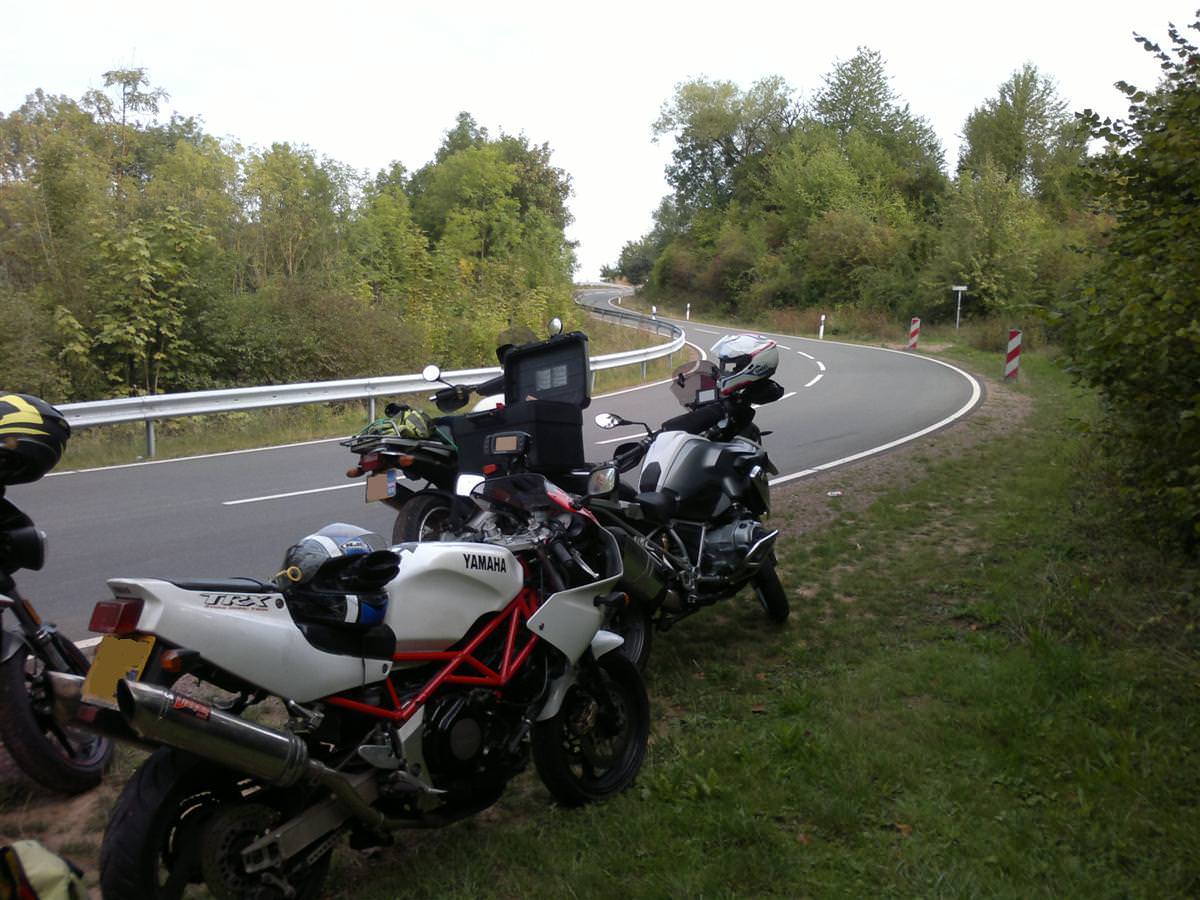 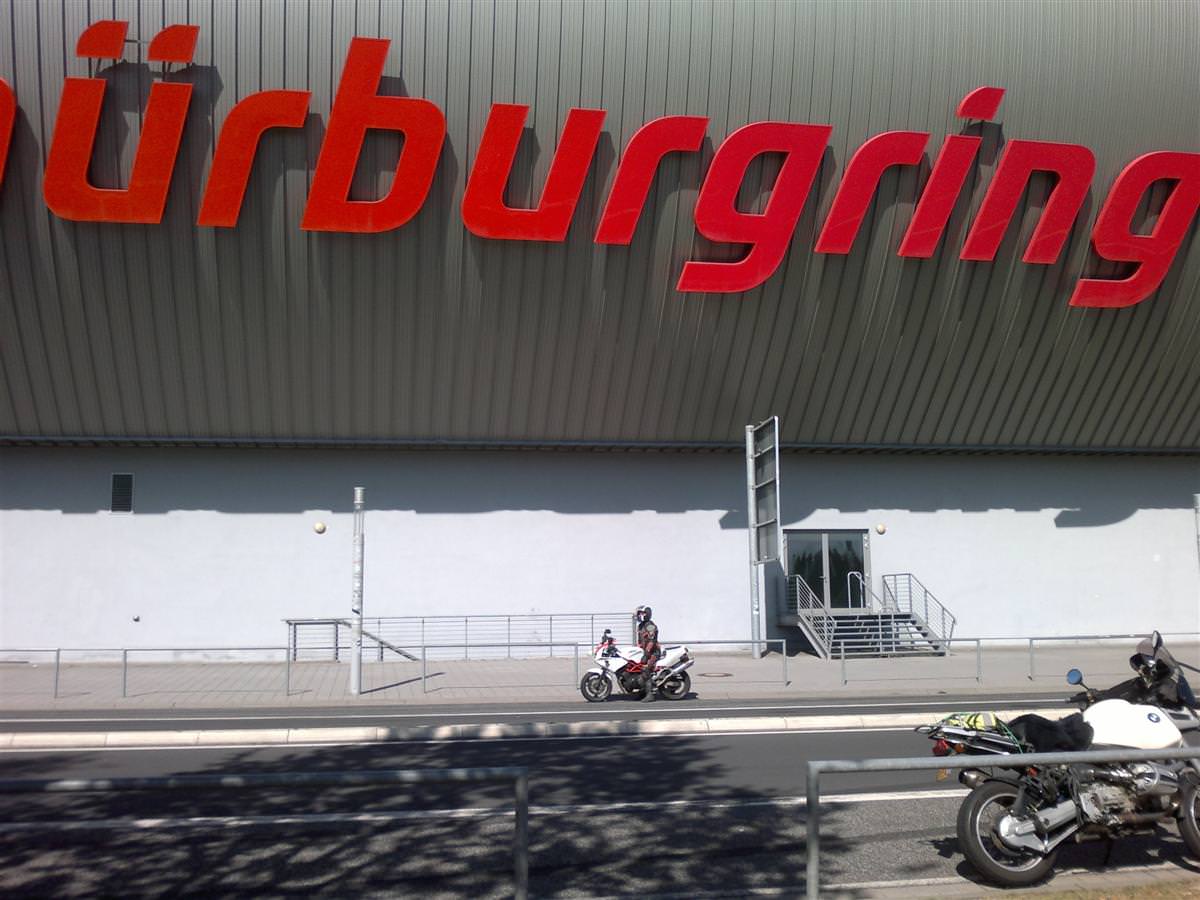 Some German machine, not quite sure what. I should've taken a close up photo of the logo on it and let you all bicker amongst yourselves what it might be while suggesting it's all somehow a scam.. 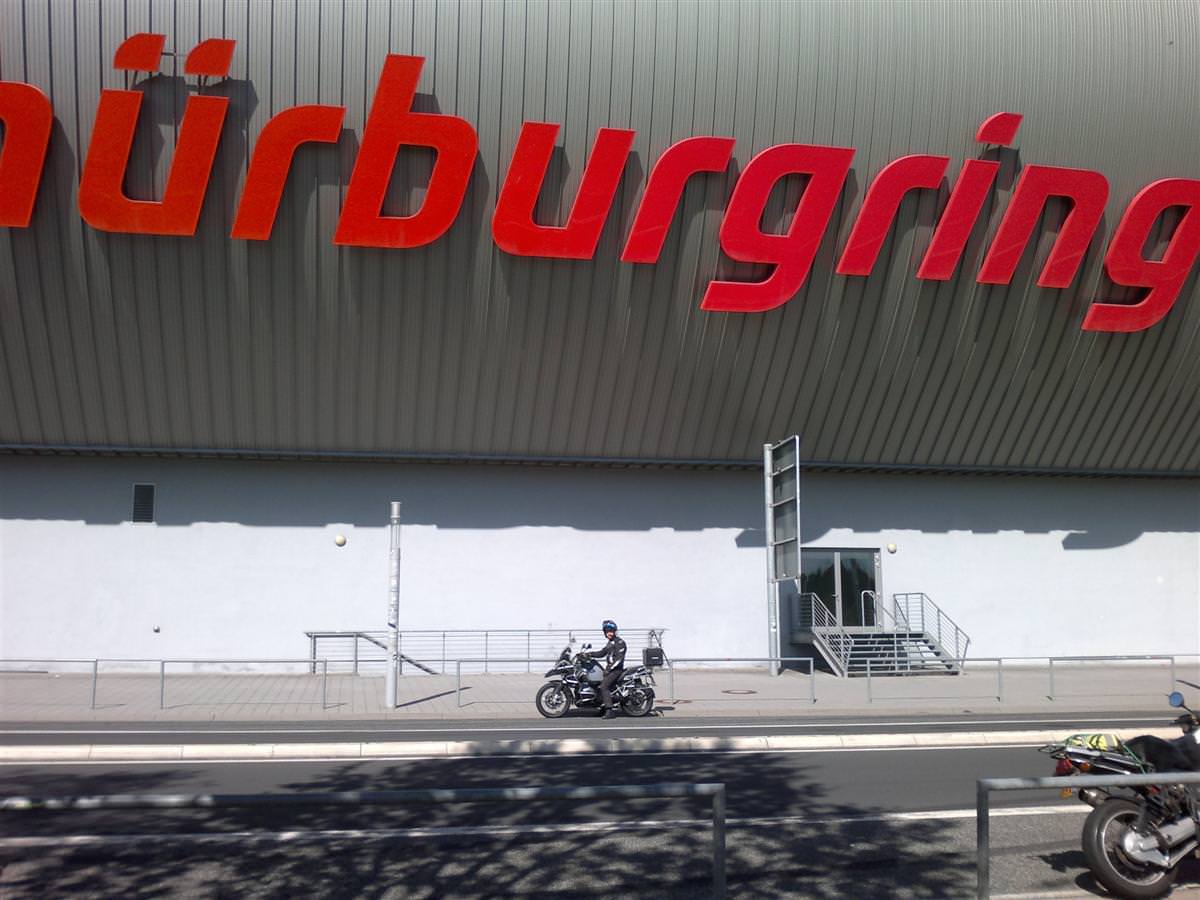 One bike parked up at the bike cafe surrounded by 8 foot wide German cars: 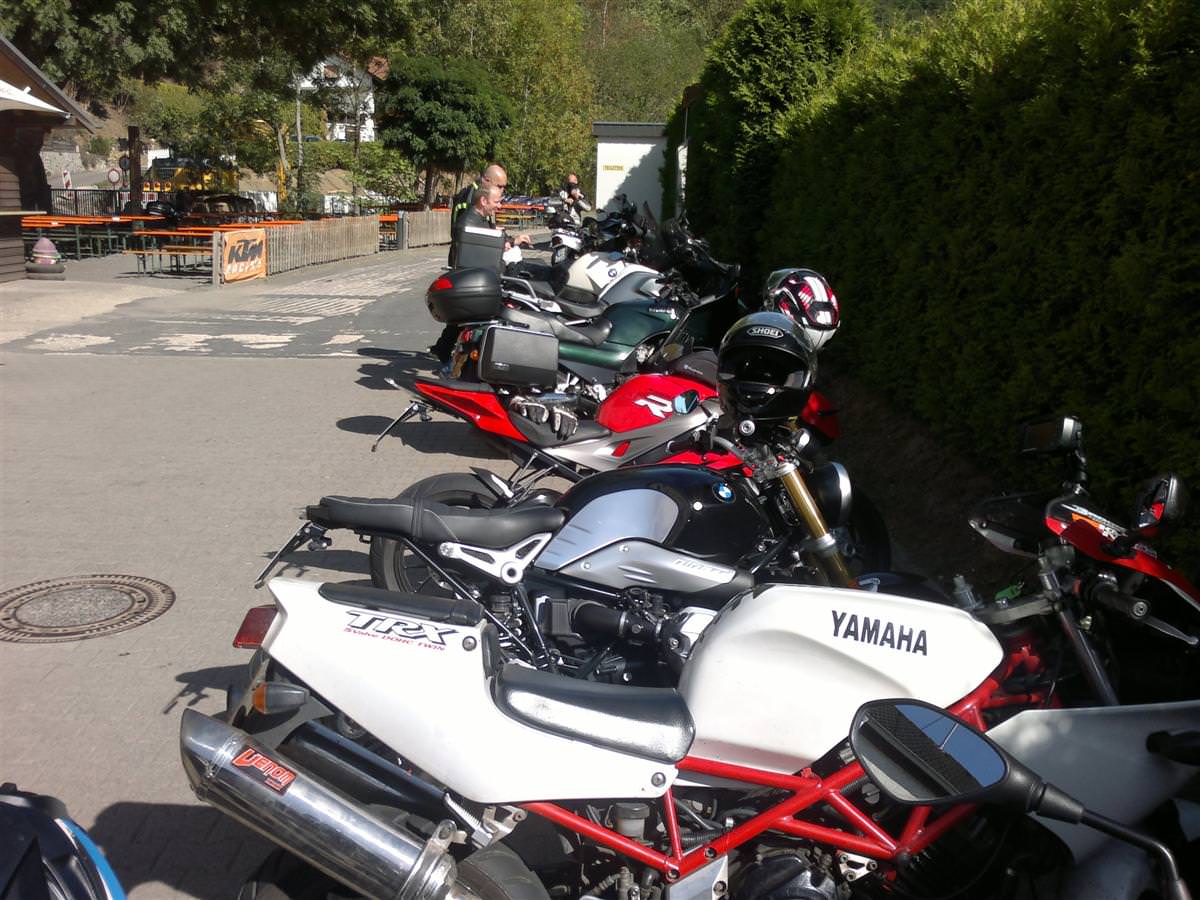 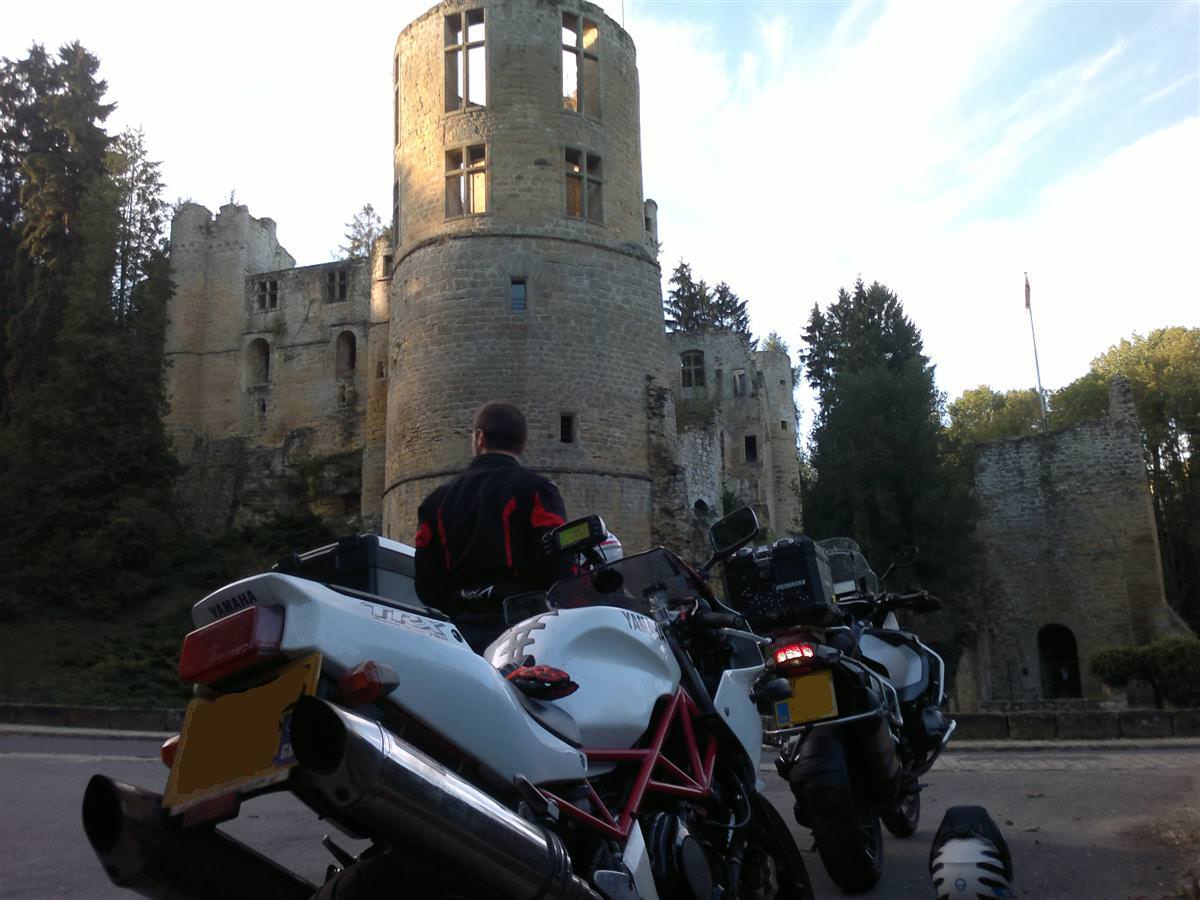 A slightly wet day which led us to Verdun. The suction mount for my 'Nav had been seriously impressive all week until it saw a smattering of rain, when the whole lot promptly fell off and kept falling off. A surprisingly stressful morning, but the 'Nav only hit the deck once (bugger!). 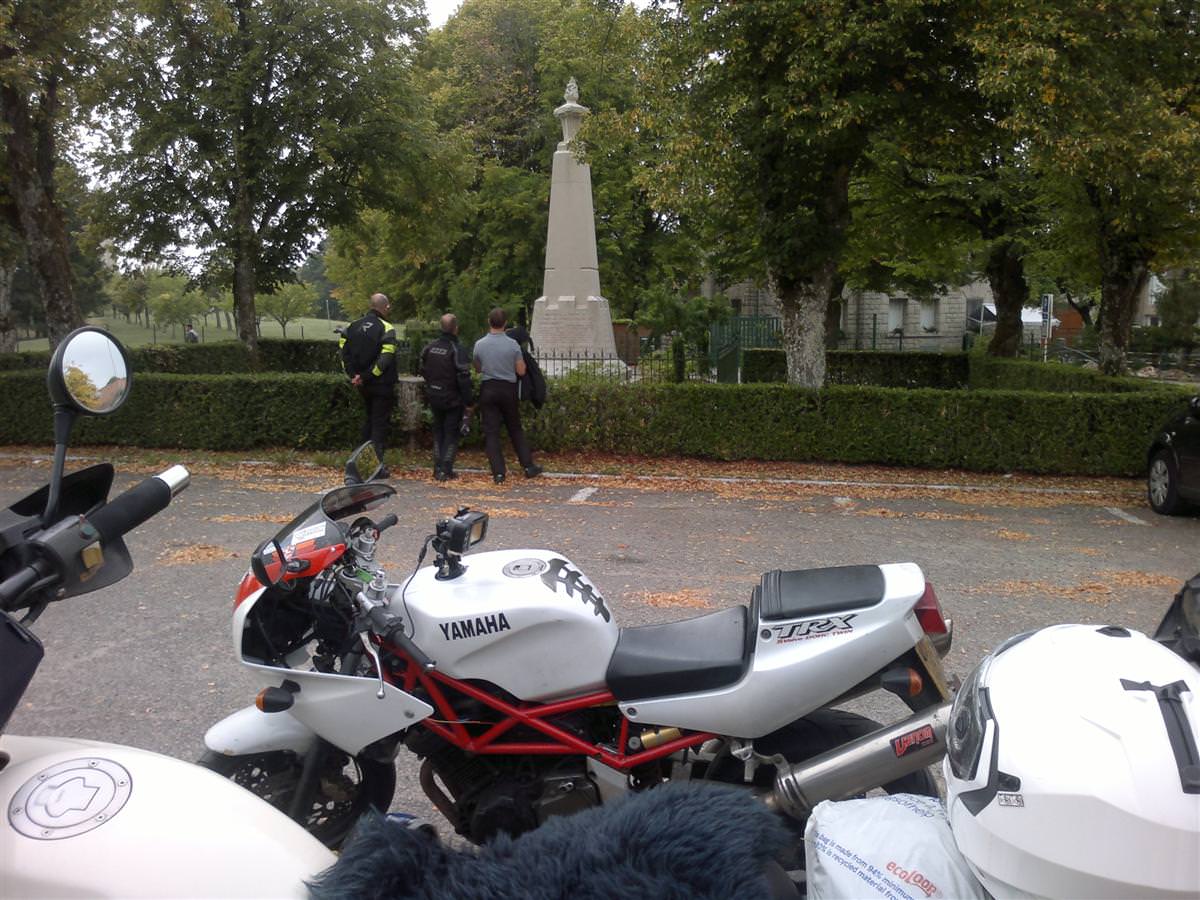 Wee wee time at all times. No bush is safe. 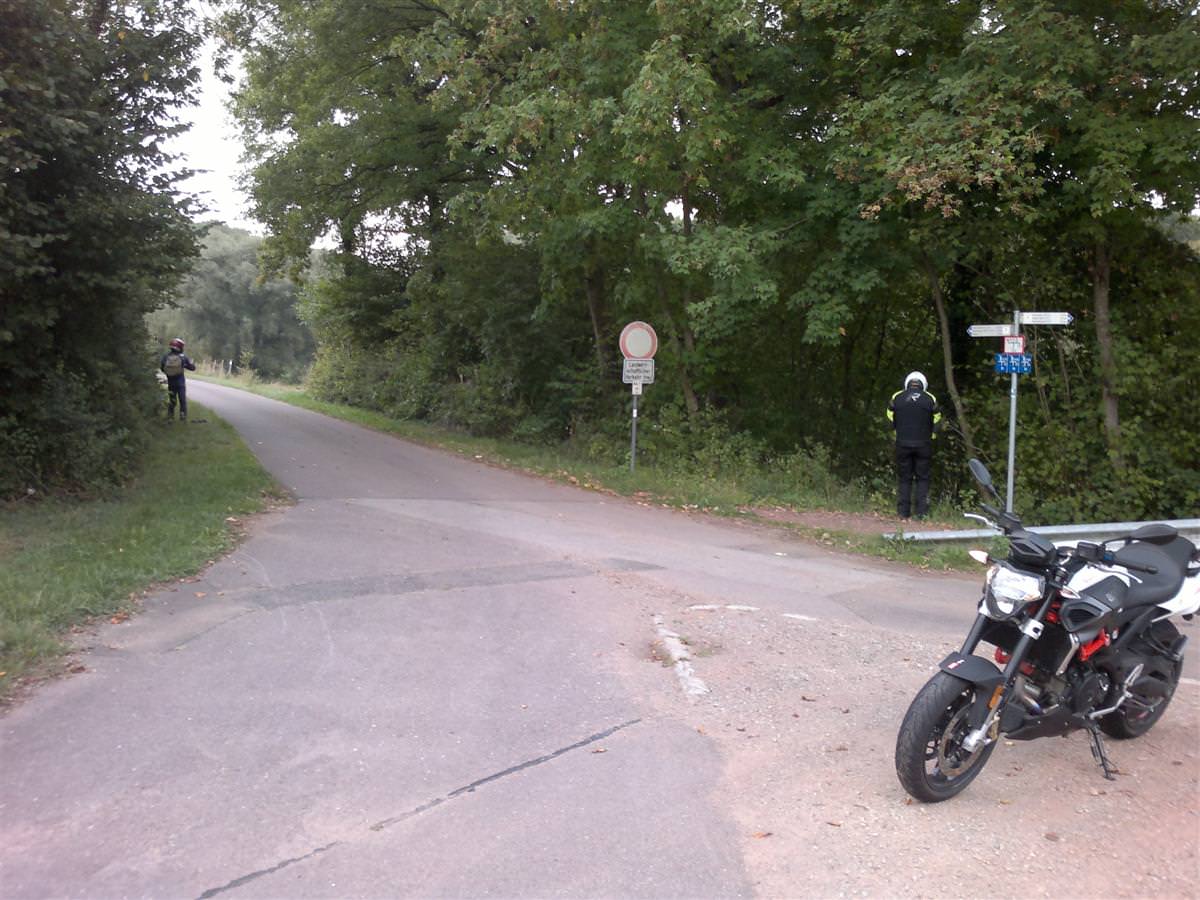 The view of the Mosel at the viewing point near Piesport. I heard something coming from miles away, it eventually turned out to be a Buell which was kind of interesting. 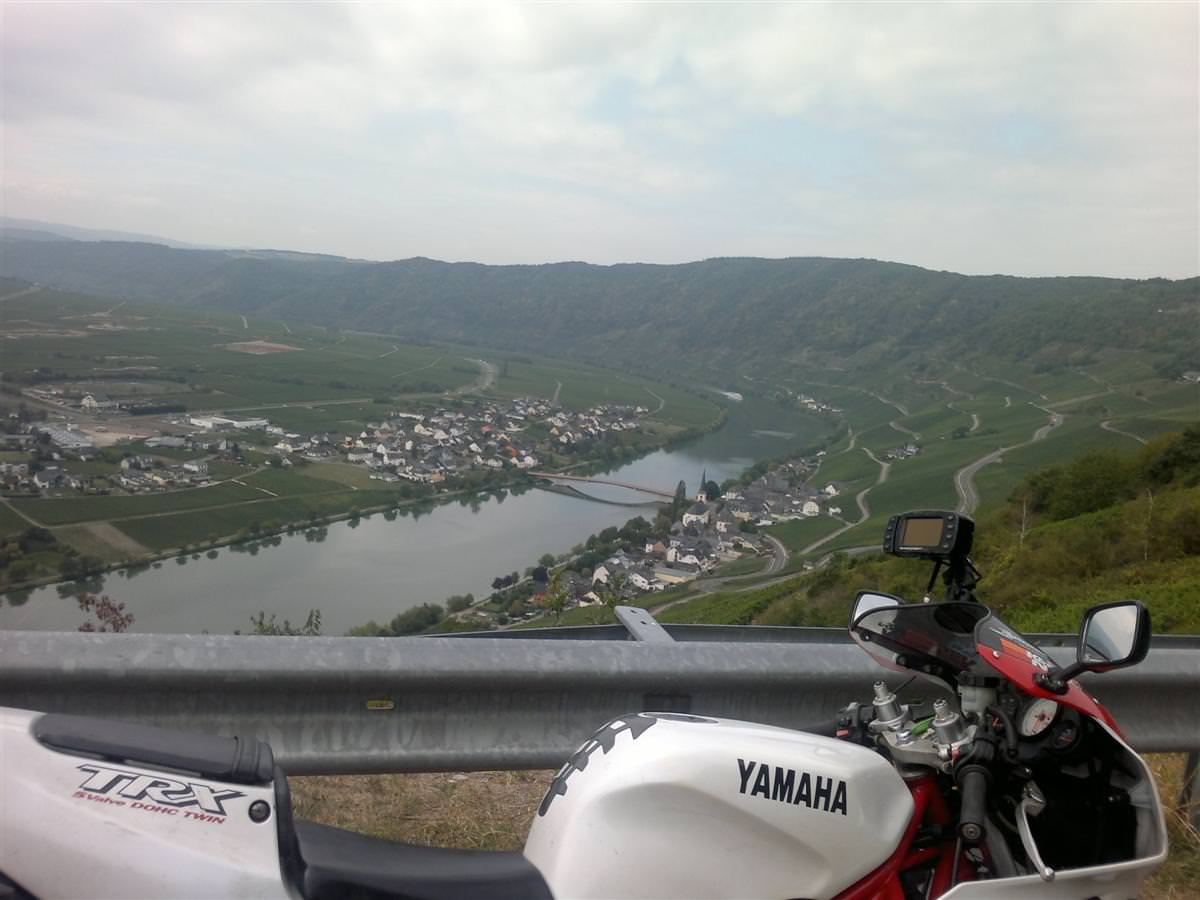 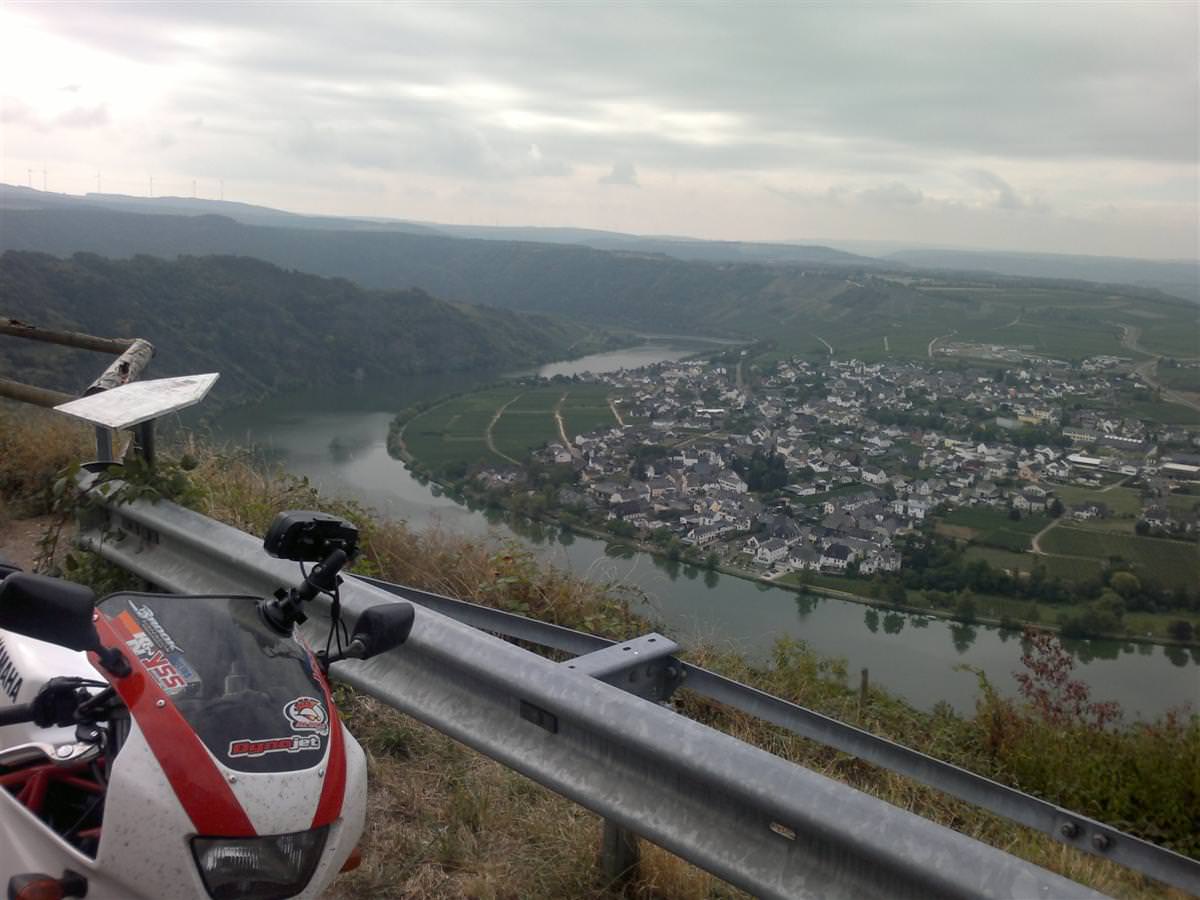 Time for bratwurst and chips, at least it didn't come with any bread! 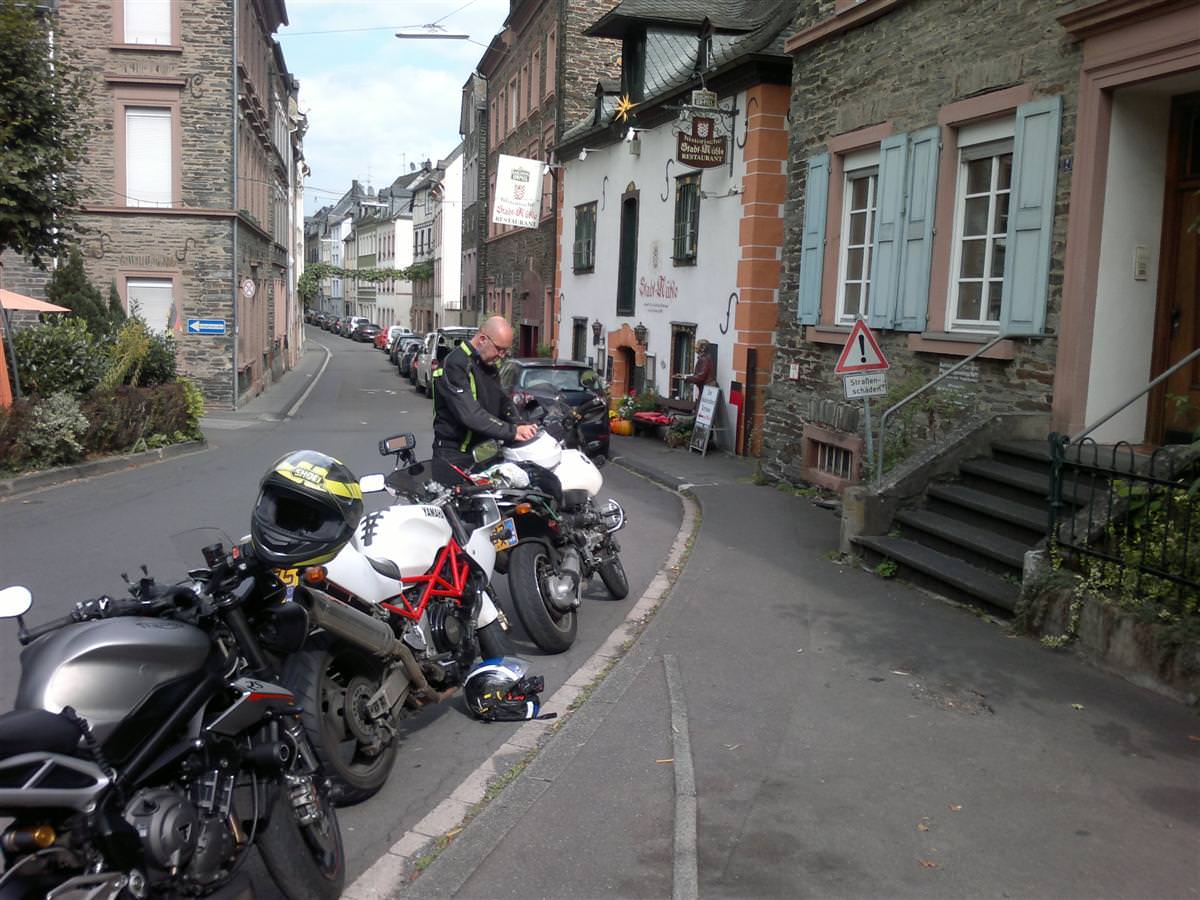 The viewing point at Cochem - I'm sure someone else will have better pictures of the actual view! Bikes razz up and down it all the time, flouting the 50kmh limit with gay abandon. A lot of them on UK plates, which felt very cliche - I'm always reminded of getting to the top of the Grossglockner in Austria, thousands of miles from home on a proper adventure, only to find all the bikes parked up there were on UK plates. Talk about a well trodden path.. 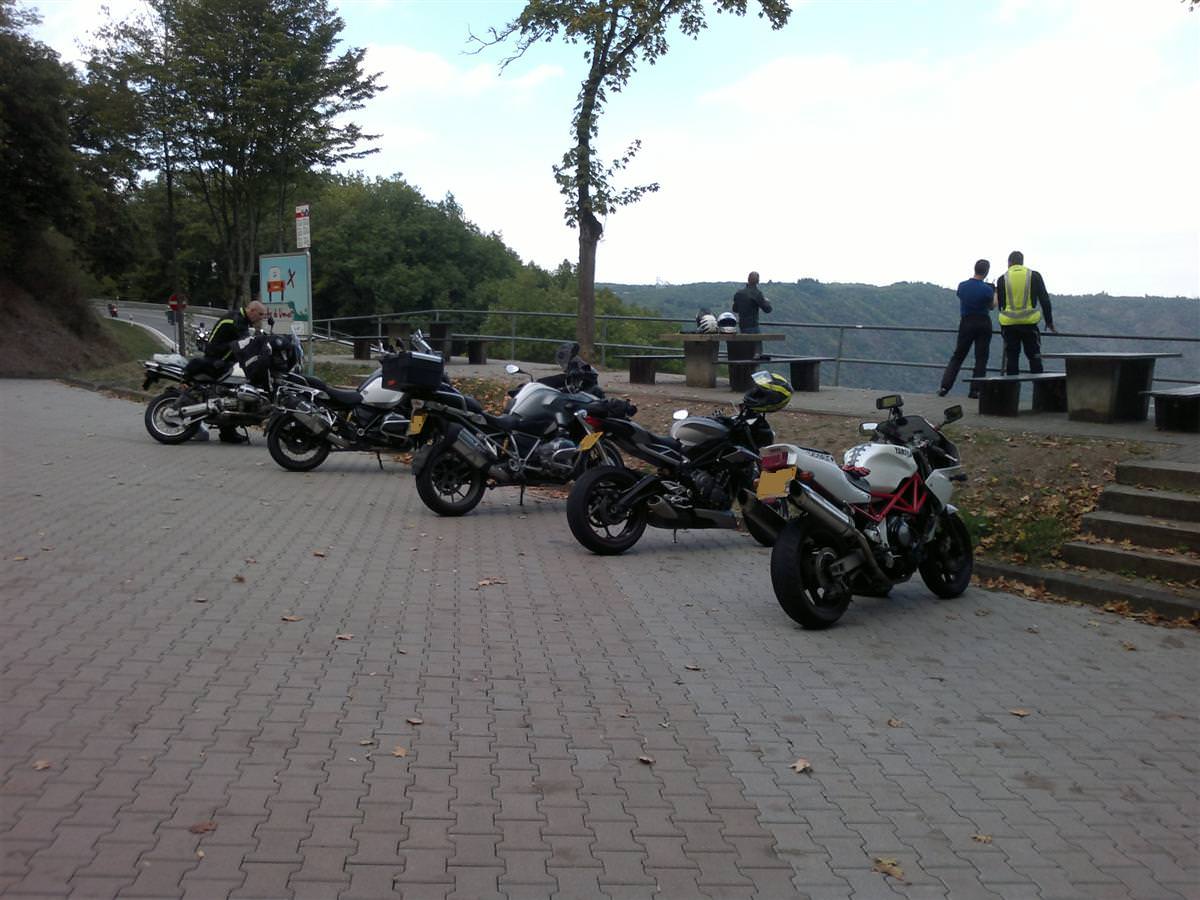 Arriving at the tunnel, something's not right - delays are imminent. 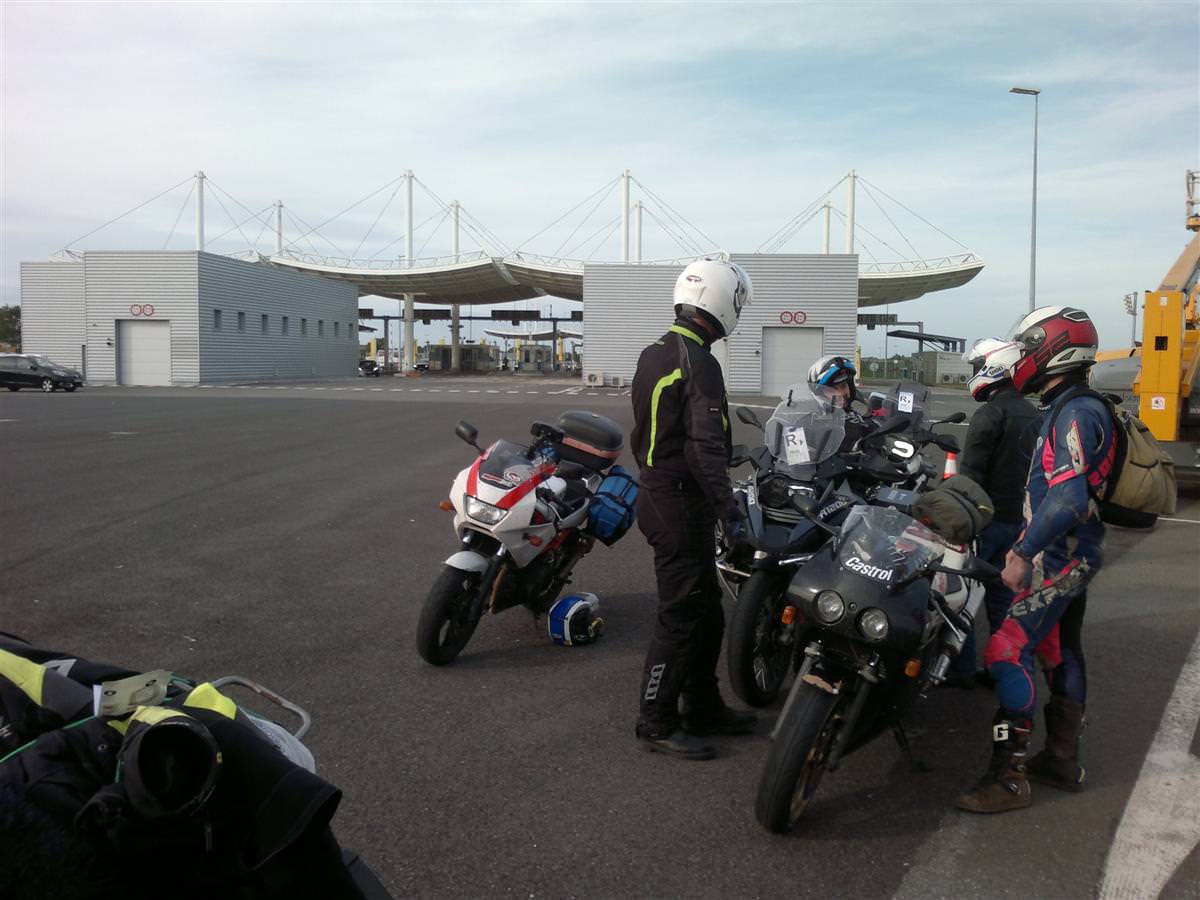 Waiting with the Road Captains on their hawgs.. 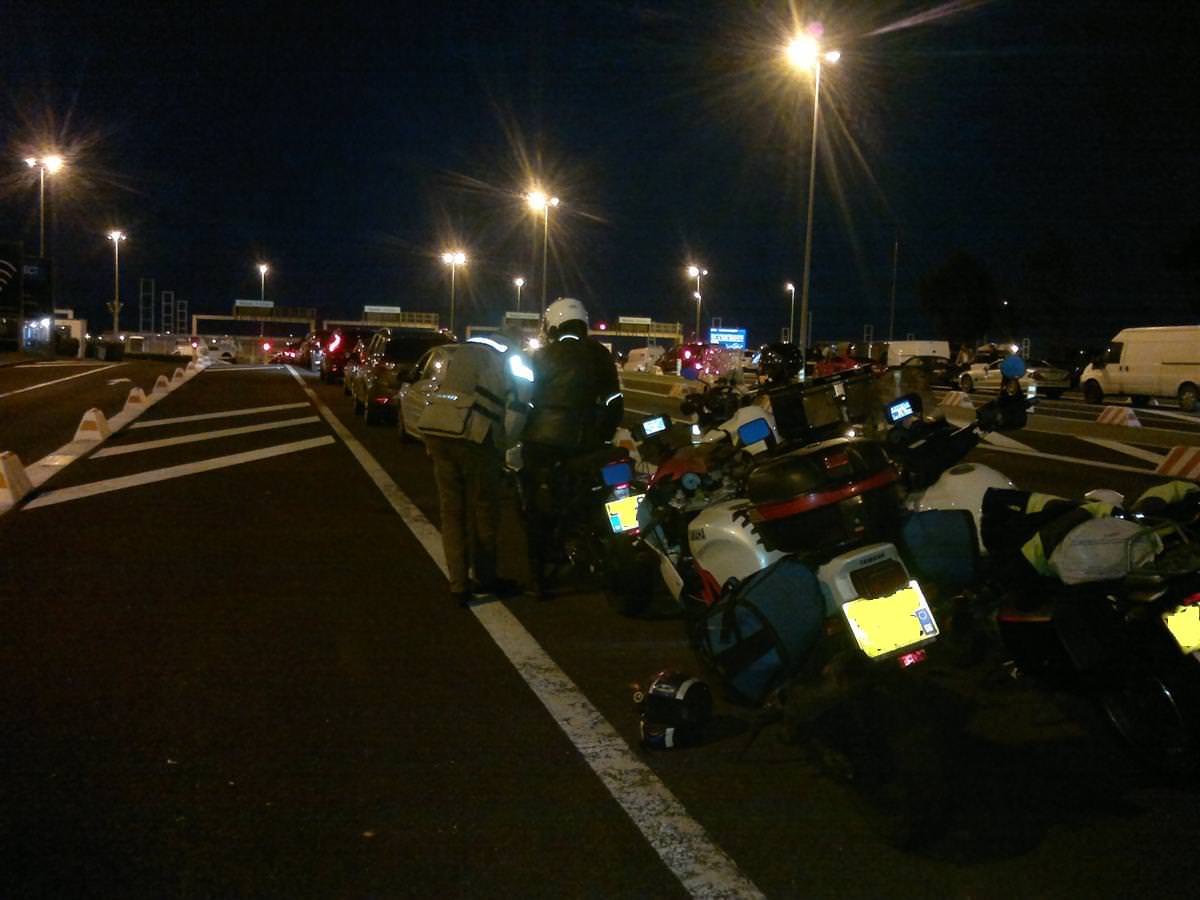 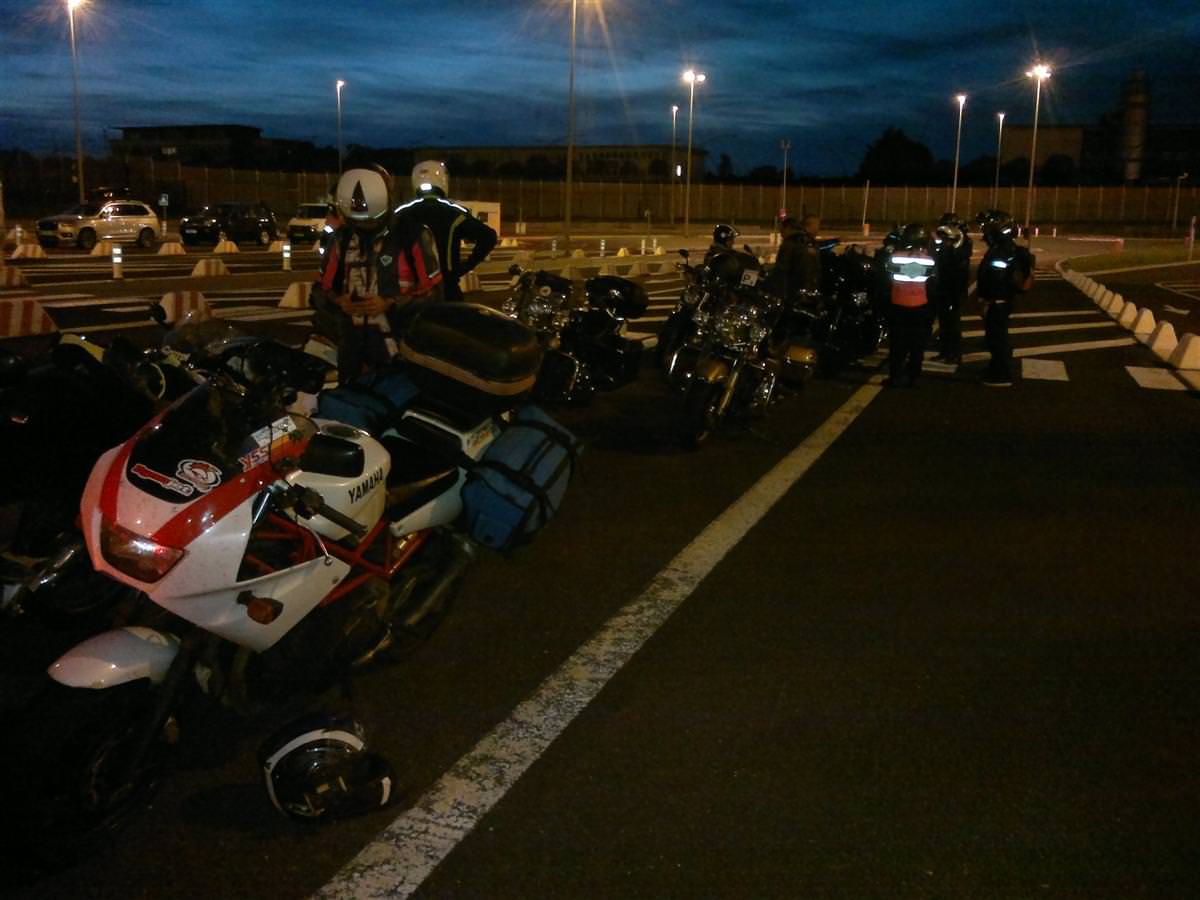 Only 3 of us made it on to the earlier/less delayed train, the others had to wait a bit longer. But they could've easily fitted, all a bit stupid. 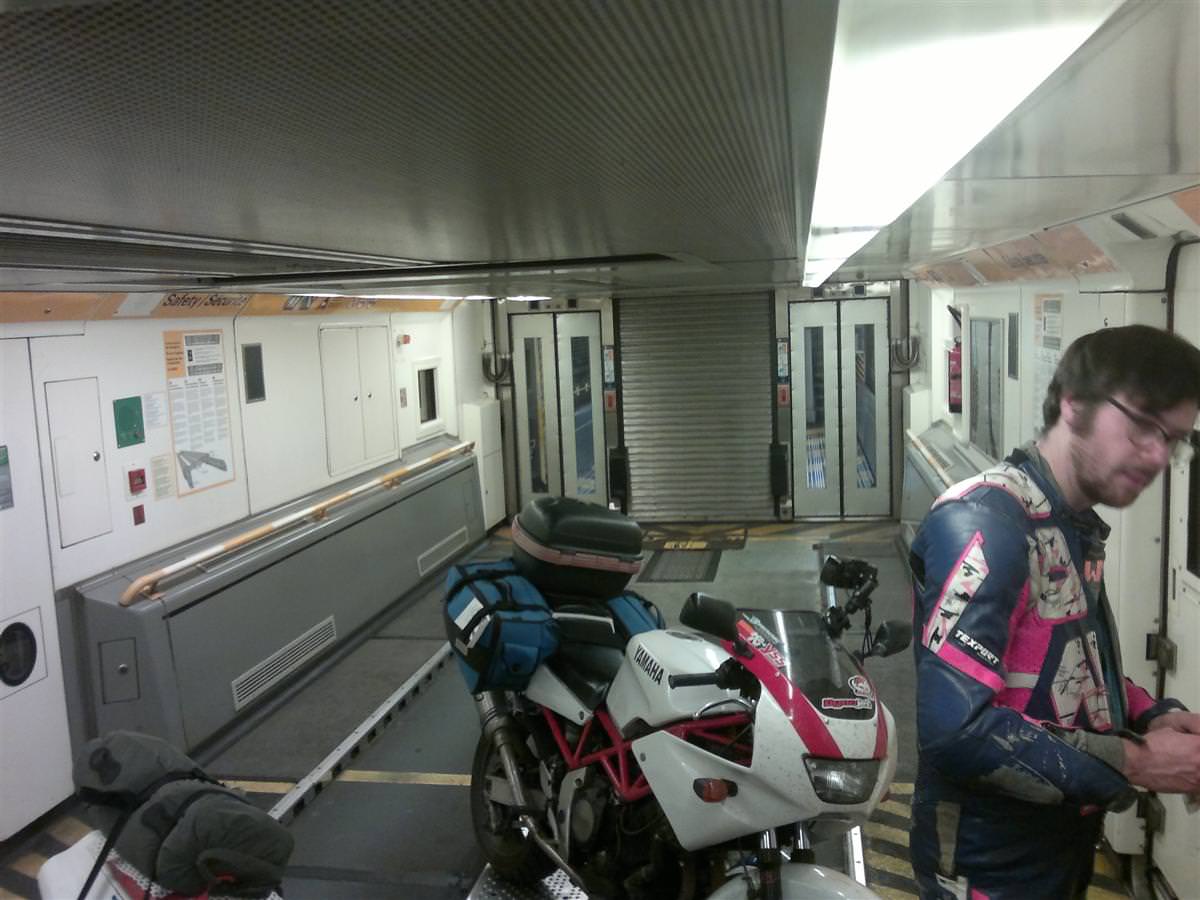 Faffing, it's already a stupid time so what's a little more faff! 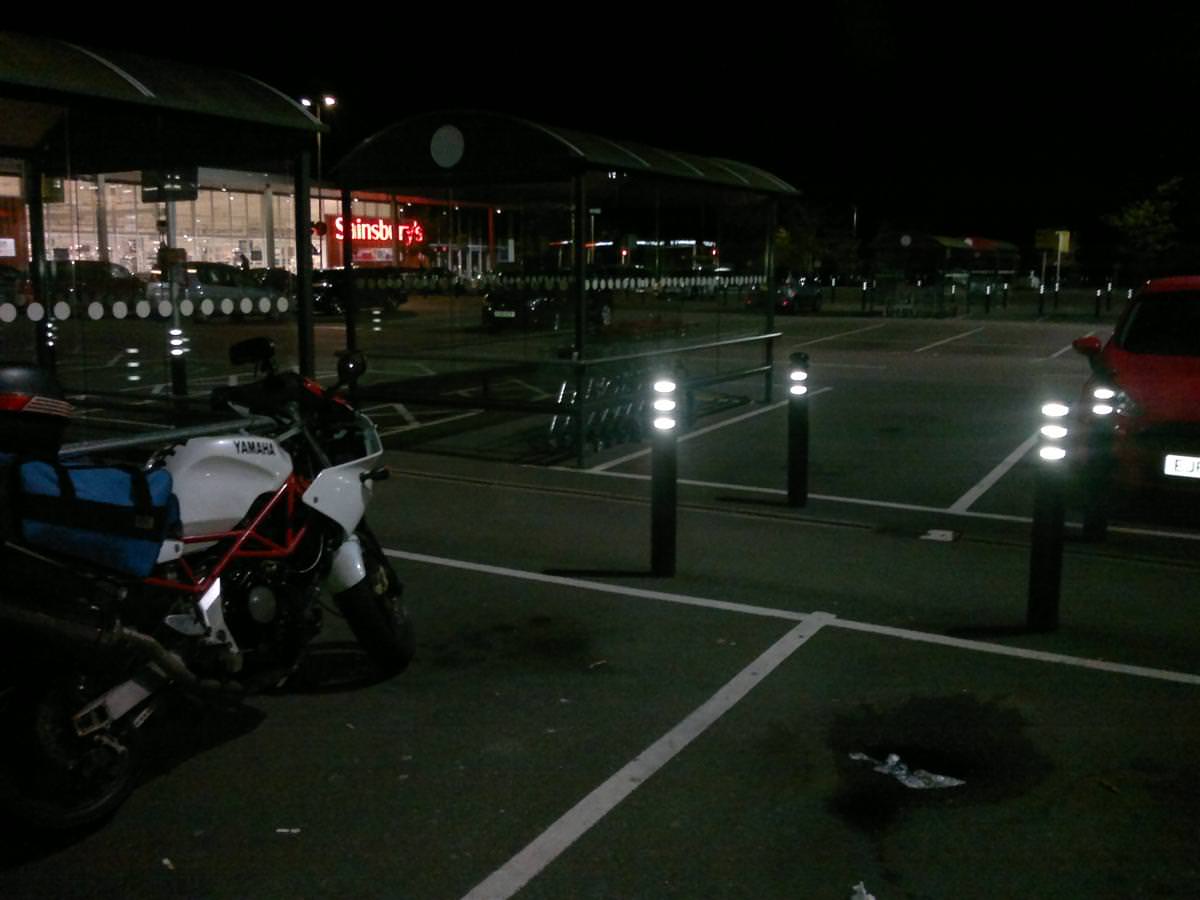 Finally get home and.. I will do a proper update in a couple of days as I feel a bit broken after a long day yesterday, I could have made it shorter by not being in the pub until 2ish the night before but where's the fun in that.

In summary though it was a top week with top lads on top roads.
You can't beat a nice bit of faff
Top

This is "Matt's Road", near Cochem. Worth going all that way for this road alone.
MattsRoad.png
You do not have the required permissions to view the files attached to this post.
Two Soups
Top

Love it. What great pics. I don’t suffer the green eye but somehow right now I am.

2018 BMW R nineT
“It’s shit. And as soon as I get home I’m going to buy one.”
That was a fellow journalist’s first impression of the BMW R nineT recently. It’s a pretty accurate summary; the R nineT is somewhat ill-mannered by modern motorcycle standards but also instantly, inarguably, infatuatingly wonderful.
Top

I have ridden this road a few times it's one of many great roads in that area
Fines are taxes for doing bad, taxes are fines for doing good.
Top

Its fantastic.. "sublime" doesn't even come close. The entire area that we have at our disposal (excluding Luxembourg) is about 3,000 square miles, north and south of the River Mosel. Low Mountains, deep cut valleys. wide open plateau. Old volcanos.. many of which have eroded down to almost perfectly circular lakes. Tiny little villages.. and only a very few moderately sized towns and one small city. And most importantly (for us) its to all intents and purposes empty.. traffic is few and far between. Over the 5 days we saw 2 police cars and that was an extraordinarily high number compared to previous years. Not once were we stuck in traffic. No filtering skills required. The roads are 80% perfect.. the other 20% about equal to the second best roads here. So, many are velvet smooth and perfectly laid out for fast riding. Stopping places are common and normally come complete with a picnic area and a great view. Another biker who doesn't wave.. is an exception. Cars generally slow down and indicate 'right' as a signal for you to pass. Nobody.. not any restaurant or cafe or anything like that, raises even the slightest eyebrow when a load of bikers turn up and sit down. If all you want is a coffee.. or a beer, (they do truly fantastic alcohol free wheat beer) that is never a problem.. in fact nothing is a problem or too much trouble. Some signal "Biker Welcome" but many do not and they make you welcome anyway. More than happy to provide food.. even if the restaurant is to all intents and purposes closed, getting ready for a private party. As one place was. They still fed us.

There is only one negative at this time of year.. and that is the relatively large number of road closures. The summer season is over and the locals make good use of this gap of good weather and light traffic to upgrade roads. and they don't simply resurface. They relay them from scratch.. completely removing the old road surface down to the base rock and laying the new tarmac on a new base layer. They do it properly. So a road will be closed and there will be a diversion.. sometimes a really quite long one, but more often than not this diversion is worth the ride and in fact a fair few of them have been noted for the next time as they were even better than the intended route.

There is a reason we go back to this area. year after year. its the best riding within an easy days ride of Calais. I have talked about the Eifel. but.. Luxembourg (away from the city) is even better, far better.. on another level. So good in fact that one day we arrived at the border with Belgium on a very minor back road. And the transition was stark. from great tarmac to a river of gravel... loose chippings. so awful that after a group rant about Belgian "roads from hell" we turned around and went back into a bikers paradise.


B259.jpg
You do not have the required permissions to view the files attached to this post.
When touring Europe you learn more about the UK, than you do the place you’re visiting.
Top

Urrrgh to the burden of responsibilities that prevent the fun we should be having!

It looks amazing. To quote my rather annoying “blaze a trial” friend who has a knack of using sayings that make you bristle it looks “amazeballs”

The tarmac alone sells it.

I hope you’re all very tired and very satisfied.
2018 BMW R nineT
“It’s shit. And as soon as I get home I’m going to buy one.”
That was a fellow journalist’s first impression of the BMW R nineT recently. It’s a pretty accurate summary; the R nineT is somewhat ill-mannered by modern motorcycle standards but also instantly, inarguably, infatuatingly wonderful.
Top

Everywhere is so welcoming its unreal! Nothing is ever a problem and the roads a scenery are awesome
Fines are taxes for doing bad, taxes are fines for doing good.
Top

Come on guys share stuff, you’ve been gone a while.
2018 BMW R nineT
“It’s shit. And as soon as I get home I’m going to buy one.”
That was a fellow journalist’s first impression of the BMW R nineT recently. It’s a pretty accurate summary; the R nineT is somewhat ill-mannered by modern motorcycle standards but also instantly, inarguably, infatuatingly wonderful.
Top
173 posts